Zero-hour Operational Entity (also known as Zoe) is not a real girl, or a real lifeform at all for that matter. She, or it, is a mimetic organism created of what can only be described as 'living metal', capable of taking the shape of anything it desires, but choosing to maintain the form of a young girl as its attempt to mimic its 'mother', Barasia. Zoe implants its mimetic properties into the earth it stands upon, transforming matter into its own personal clay with which to mold all kinds of objects, from weapons to buildings to anything it requires, which rise out of the ground to the sound of a strange, ethereal vibration that appears to be Zoe's natural means of communicating. Somehow unable to speak, Zoe wears only a tattered rag and old flip-flops in its humanoid form, and its peculiar eyes spin endlessly, emotionlessly...

TentoRaijin was once a lowly soldier on the Queen's council of Cluster Prime, a cyborg insectoid rebuilt from the broken body of a fallen alien warrior. Because of his history, he would never ascend to a position of power. But then he met another alien - a little girl who wanted to prove her point.

Tento and Barasia forged a powerful union that eventually lead to the overthrowing of the Cluster's ruling body. In exchange for helping Barasia fulfil her objectives, she helped instate him as the new ruler. But before she left, she helped give him a present. Taking shape out of an old tattered cloak and flipflop shoes, a liquidmetal creature created by the two collaborators took on the appearance of another little girl.

Mimicking Barasia as best she/it could, the creature (known as the Zero-hour Operational Entity or Zoe) was eventually given full life when Barasia met her doom. Quickly growing fond of the little gynoid, Tento swiftly made her his child and together they oversaw a new Cluster rise from the ashes of its former self. 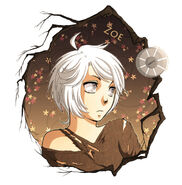 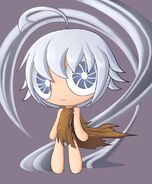 Add a photo to this gallery
Retrieved from "https://snafucomics.fandom.com/wiki/Zoe?oldid=57221"
Community content is available under CC-BY-SA unless otherwise noted.