Bleedman or ('Vinson Ngo') is the creator of Powerpuff Girls Doujinshi, Grim Tales and Sugar Bits. Which are all found on his Deviantart account or Snafu-comics, in which he, perhaps for less confusion among the crowd, uses the same user name (Bleedman).

All comics created by Vinson are all fan based. Taking on childhood favorites such as; The Grim Adventures of Billy & Mandy, My Life as a Teenage Robot,The Powerpuff Girls and so on. Bleedman at first did all the writing and art for all three stories but later got help from his partners. He then only began to do the art and now he only does line-art. He recently got a new writer for GTFO.

A collision of many more childhood favorites than just the Powerpuff girls. It has also featured Jenny from My Life as a Teenage Robot, Betty from Atomic Betty, Courage from Courage the Cowardly Dog, and many more.

The story has many plot lines with one following a romantic aspect of Blossom (Powerpuff Girls) and Dexter (Dexter's Laboratory) and another following the more dramatic affects on Dexter after the loss of his sister Dee Dee.

One of the few original comics created by Bleedman (that possibly takes from fairy tales such as the ginger bread man, little red riding hood, ect.). It is a tale of monsters both inner and physical. The main character, a sugar princess, is one of many facing an inner monster but, in her case her inner demon has come out into a physical form. Causing all sorts of mayhem and chaos.

As time progress, Bleedman's comics (Powerpuff Girls Doujinshi, Grim Tales and Sugar Bits includes also King of Fighters Doujinshi and continuation for Invader Zim: Manifest Doom) became better and more detailed. In the first appearance, all characters have black eyes with no pupil and the comics are extremely two dimensional. In the second appearance, the characters have different eye colors but still no pupil, however their arms and legs are slightly larger and the dimension improved a bit. In the third (and possibly final) appearance, their design became more to Griddles's where their eyes now have pupils and their arms and legs have returned to normal size and the details are much better, showing better shadows and three dimensional.

On every April 1st (which is April Fools Day), Bleedman may create special comic pages just for fun which consists of mysterious and crazy plots such as meeting unnecessary characters or changing a character's appearance. However, after the special page is created, the plot will return to normal.

Snafu comize upgrade
Add a photo to this gallery 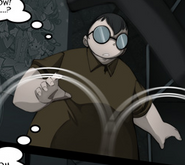 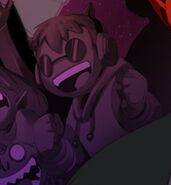