Tootie is a character from Powerpuff Girls Doujinshi. She is a student who attends the Megaville Elementary and one of the members and leader of Buttercup's fanclub. She is originated from the Nickelodeon show, The Fairly OddParents.

She is mostly being used as a background character and doesn't have an impact on the story. Tootie is one of the Buttercup fangirls and is a student of Samurai Jack's Kendo class.

Tootie has black hair with floating pigtails and dark eyes. Her glasses are distinctly different than other characters on the show that wear glasses, because they are shaped differently, they have blue lenses, and her eyelashes are attached to them. She wears purple braces on her teeth without a wire, possibly for an overbite which is seen sometimes when she smiles. She is around Timmy's height, and wears purple horn-rimmed glasses, a black vest over a white short-sleeved shirt, and a gray plaid skirt with white panties underneath over black tights along with black patent leather Mary Janes. Her outfit resembles a Parochial school uniform.

Tootie is a very intelligent girl but does not surpass Dexter or Blossom. It is possible that she posseses some Kendo skills since she attends Jack's Kendo class, she also is seen to be good in cheerleading and dancing as she also attends those classes.

Tootie is a 10-year-old girl, and the younger sister of Vicky the Babysitter. She has an obsessive unrequited crush on Timmy Turner, and usually appears to pester Timmy during one of his adventures, although she has also stood up for him on many different occasions where others would not. She eventually grows up to become a very beautiful and matured woman, and she and Timmy finally fall in love. Not long after, she then gives birth Timmy's daughter, Tammy Turner. 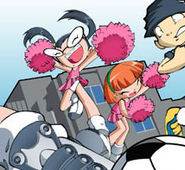 Tootie in The FairlyOdd Parents
Community content is available under CC-BY-SA unless otherwise noted.