TIN (full title: TIN the incompetent Ninja) is the main character of TIN the Incompetent Ninja. He is a clumsy ninja who always accidentally kills other people. He is the husband of TIN's Wife. He was first a ninja but was sent back to school, he was sent even farther back to elementary school where he became teacher. He eventually joined the Samurai War Warriors.

TIN just came back from assassinating Chung Him Yuen, although Master Sensei said it wasn't him. TIN continues to slaughter random people in the hope he gets the right one, but his sensei keeps saying it was not Chung HIm Yuen. Then he killed a little girl to get her lolly. He brought the girl to his sensei, but the girl appeared to be his granddaughter. His sensei sent him to a school so he could work on his skills. On school he was practicing throwing ninja stars. But he accidentally threw both his ninja stars in the eyes of his Ninja Star Sensei. His trainer wanted to kill him but TIN quickly swapped with someone else who instead got killed. He told the news to the children of the killed ninja, who began to cry so TIN killed them too. That night TIN slept with a whore and his wife. The next day Mr. Miyaoi saw that photo on TIN's letter and hung himself. His new sensei was Slash. TIN became nervous and killed one of his comrades. TIN and Slash reunited with each other again, and Slash asked if he also was a teacher, but TIN said he never made the final test. That night in bed he and his wife talked about Slash.

The next day they practiced fire ability but Tin accidentally burnt the Ninja Orphanage. TIN mixed every chemical and then said it was Kool-Aid and shared it with everyone in class, who instantly died. Slash gave a pop-quiz and TIN had 100% by stabbing everyone. Slash then decided to sent TIN to Ninja Elementary School because TIN was too down-syndrome.

TIN arrived when they had recess but when the Elementary Sensei saw TIN he committed suicide. TIN then decided to be the kids sensei. The first test was to grab the donut from under the box, but in temptation TIN grabbed it himself, just according to Solid Snake's plan. They then did a nap. Later he was jerking off when Nerd Kid said he had too see that Fat Kid was on the flagpole by Bully Kid. But it reminded of what Slash did to him. TIN said they will form an elite and killed a kid. Nerd Kid put up a trap that almost killed TIN. Afterwards Nerd, Fat and Teddy Bear Kid showed him some things.

Master Sensei said they needed TIN to win the Samurai War, Slash told him he sent TIN to elementary school. Master Sensei called Slash a downie. TIN and his students wanted to hang Bully Kid on the flagpole but got hung themselves instead. TIN tried to free them with fire breath but burnt the elementary school. Slash came to get TIN and saw the burning school and extinguished the fire. After that Bully kid added Slash to his "to kill" list. Because of the previous events that happened Master Sensei made Slash and TIN partners. Slash tried to prove Master Sensei that TIN is terrible but the sensei said them to leave. The evening he took his wife to the movies to say goodbye to her.

Slash introduced TIN to their new team; Sue, Ninju and Jam. TIN then finally understood why they lost the Samurai War. They had to train TIN so they could win the war. First Jam taught him how to stay in balance, by cheating. Then Sue did power training with him. He ripped off TIN's clothes and began to fight with him. TIN threw knives at him but he missed, Sue then stormed towards him but TIN stuck two knives in his feet so he wouldn't get pushed in the lava. TIN wanted to give a death blow but sliced the clothes of Sue revealing his naked body. Ninju saved TIN from sue but TIN quickly passed out. Ninju tried to help him but there wasn't much hope.

TIN wears the traditional ninja outfit. He has a gray ninja suit with a red band around his waist and wears slippers. He has big eyes compared to the other ninja's. He wears tighty whitey's underneath his uniform.

Although TIN is a ninja he is very clumsy. He is very strong but he has no skills and can't preform any proper abilities. When TIN throws Kunai's he mostly misses his target. When he had to throw ninja stars he hit the eyes of his teacher instead of the target and when he tried to hit Sue with his Kunai's he missed and only hit the surrounding trees. He also is able to breath fire but mostly misses his target too. 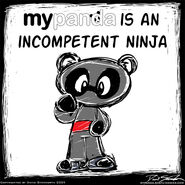