Sue is a character who appears in TIN the Incompetent Ninja. He is one of the Samurai War Warriors who try to defeat the samurai's.

He was first introduced by Slash along with Ninju and Jam. he was appointed to train TIN to make him stronger and worth for using in the war. After TIN trained with Jam, Sue could train him. Sue ripped of TIN's clothes and surrounded their battle ring with lava.

TIN first threw Kunai's at him but those all missed. Sue then stormed at TIN and grabbed him. He held him above the lava but instead of throwing him in it he threw TIN back on the platform. Sue stormed again at TIN, who now grabbed two Kunai's and attached himself to the ground with them. Sue tried to push him off but he couldn't do it. TIN then slashed Sue with a Kunai but only sliced his clothes, making him naked. Sue got very angry, he grabbed the piece of ground TIN was standing on and threw it in the lava. Luckily Ninju came to save TIN from the platform.

Sue is a overweight, bald ninja with a small beard, although he mostly is referred as a sumo wresteler. Sue wears nothing except for the traditional sumo wrestlers uniform. Sue's uniform is red.

Sue represents power and thus is very strong. As seen he can easily throw ninja's, like TIN, away. He is even so strong that he can lift the ground. 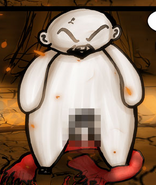 Naked Sue
Add a photo to this gallery
Retrieved from "https://snafucomics.fandom.com/wiki/Sue?oldid=43352"
Community content is available under CC-BY-SA unless otherwise noted.