Sora, a twelve year old child who is the eponymous Talisman from Griddles new fiction episode. She is initially introduced as a shy and optimistic youngster who is eager to make new friends in new places, but it's revealed that she has struck a partnership with another young girl who offers her something irrefusable.

Sora was genetically engineered when she was younger, granting her drastic power enhancements and the ability to control the dimension around her. This leaves her known as a 'Zoner'. The brooch around her neck (which can be pinned to her shirt) acts as her power-flow regulator. She would be destroyed by her own power without it.

Sora wears some old-looking clothing to help provide her with a bit of warmth and also because she loves how comfortable they can be. She is particularly fond of her cap, which she believes used to belong to her father before he died. When she moves to new places, she's extremely susceptible to the climate at first because of her spacial sensitivity. Over time it passes, but her clothes can keep her warm. 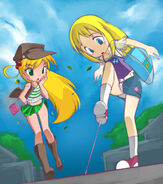 Blonde Brigade
Add a photo to this gallery
Retrieved from "https://snafucomics.fandom.com/wiki/Sora?oldid=57210"
Community content is available under CC-BY-SA unless otherwise noted.