The Snake Slaves are the minions and Servants of Satan Kitty and are minor characters of The New Adventures of Skull Boy.

Their first appearance was along side of Satan Kitty in her lair, while monitoring the activity inside Seven Circles of Pizza through Ira's eyeball, using the psychic powers of one of her Snake Slaves. It is known that some snakes also speak, like the scientist, and not all act only as butlers.

The Snake Slaves have the bodies of a snake, along with long snake tongues that hang off their lips constantly. Attached to their snake bodies, they also have arms with claws attaches, and their elbows are almost always bent. giving their limbs a crab-like appearance. 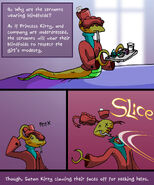 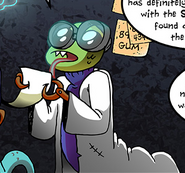 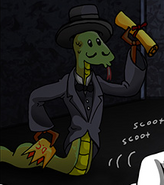 Blue Snake
Add a photo to this gallery
Retrieved from "https://snafucomics.fandom.com/wiki/Snake_Slaves?oldid=27731"
Community content is available under CC-BY-SA unless otherwise noted.