Skull Boy is the titular character of The new adventure of skull boy. He is the older brother of Psycho Kid and the younger brother of L.D.G.. He works at Seven Circles of Pizza but often forgets he works there. Demon Child and Stalker Girl have a crush on him.

Skull Boy woke up and went to his closet, where he greeted Gary, and dressed himself. He tried to make toast with jam but didn't have the patience to make it. Psycho Kid came inside with the mail and gave it to his brother. Skull Boy read the letter he got from Stalker Girl who was spying on him through the window. Skull Boy shoot her and said not to return. L.D.G.was making soup, which was taking very long. Skull Boy requested to eat at the place next door but L.D.G. said that was a pet cementary. Psycho Kid was dancing to music and then jumped out of the window to catch the neighbour's cat, so Skull Kid had to catch his brother.

LDG was still making the soup, as Skull Boy stabbed himself of the hunger. Psycho Kid also was very hungry and then bit off the arm of his sister. LDG then followed Psycho Kid to kill him, as Skull Boy was getting more impatient. Skull Boy called Eight-Bit to grab some pizza at the restaurant. But 8-Bit was having trouble with getting out and used his Shish-Koom Bahmon to open it although it failed. Skull Boy hopped on his Skull Board and ride away (while being followed by Stalker Girld). 8-Bit came out of a sewer pipe and smelled horrible, Skull Boy asked why, 8-Bit answered his "Yugi-Hoe" couldn't destroy his door and Skull Boy tried to explain it was created by LDG for him, but he wouldn't listen. The whole time he was being watched by Demon Child.

Skull Boy and 8-Bit went to the Seven Circles of Pizza. Skull Boy made a comment about all the hell puns while on the background Demon Child killed Stalker Girl. An employee said that Skull Boy was late for work, and Skull Boy actually forgot he worked there and wanted to get fired. But when he was reminded that he had to make money he dressed up as clown and went to the kids party. Skull Boy didn't allow anyone into the ball-pit because of a shark but let two kids in because they were kicking him.

Skull Boy has rose pale skin and red pointy hair. He wears a black hoodie with a skull head on it and with a red outline. His hood was made with afro samurai technique. He wears blue jeans and red shoes, he has white teeth on his shoes and blank eyes on them.

Skull Boy has a very short temper and thus gets angry easily. He also is very impatient as he couldn't wait a few seconds for the toast to be done. He seems to hate his siblings but in secret loves them very much. He has a good relation with 8-Bit, although he is a bit dumb. He hates stalkers. Kinda Edgey he appears, judging by the way he dresses and acts.

Skull Boy being an immortal is also gifted with a special ability. He has the ability to summon a gun in his hand out of nothing. His pistol has infinite bullets. He is a professional shooter. He also has a sentient skateboard called, "Skull Board" and a moped for delivering pizza. 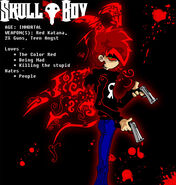 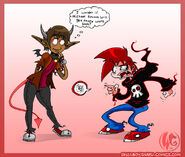 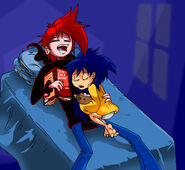 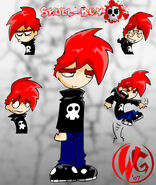 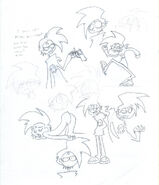 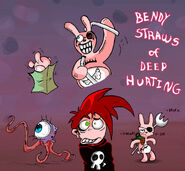 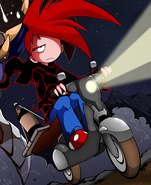 Moped
Add a photo to this gallery