A Scythe is a magical weapon in the Underworld which can only be wielded by a Reaper, although others have been wielding it on several occasions. The scythe is the signature weapon of Grim Reaper. His son, Grim Jr., also has the ability to wield one but only been seen doing so a few times.

In Powerpuff Girls Doujinshi, Grim Reaper is seen wielding his scythe when he makes an appearance. He first came to reap the soul of Mandark and much later in the story to reap Samantha's soul.

The weapon has a more prominent role in Grim Tales. Grim is often seen with his scythe in combat and is by far the most skilled scythe user. The scythe was featured a few times with Grim in the background story of him and Mandy. Where is also was shown that Mandy and Billy used the scythe as well, although Mandy to a more destructive cause. Grim wanted to use the scythe to reap Mandy's soul if she would reject marrying him. The first time Grim used his scythe in the present day of the comic was during the battle against the Demon Reaper, who then still had the form of the Pumpkinator. When he entered the Demon Reaper he reaped the soul of Grim Jr. to save him. Afterwards he continued the battle against the monster again. The last time Grim was seen using it was to free Grim Jr. and Minimandy from Mimi's trap.

Although the scythe is his signature weapon and is often featured with it in promotional art, Grim Junior only has shown to wield the scythe twice times. The first time was at the beginning of the story where he wanted to slay Violator with his scythe, but never really attacking him. The second time was during the battle against HIM. Minimandy first summoned a scythe to attack Junior with, but freed himself by kissing Minnie. HIM got a hold of Minnie which allowed Junior to grab the scythe and attack HIM. But HIM managed to claim the scythe and wanted to slay Jeff and Junior, but was stopped by Mimi who then teleported them away. HIM possibly still is in possession of the scythe Minimandy summoned.

Junior's Nergaling was also seen wielding the scythe when he was in his Demon Reaper form. It was one of his way to attack his opponents. Now that the Nergaling is with Junior he can form his body into a scythe as well. But it possibly also can be that Junior's own scythe has been taken over by Nergaling. This form was only shown in the cover of Chapter VIII but hasn't been used yet.

Aside from the wielders, Scythe 2.0 also appears in the comic who is a scythe itself, but capable of thought while still can be used as a weapon. Scythe 2.0 is currently locked away in Mandy's Vault. When is broke free it was used by Minnie to slay Mandy Doll and Happy Huggy Stuffy Bear because of her jealousy towards Junior. She afterwards slashed it into a pillar and Scythe 2.0 got locked up again afterwards.

The primary function of the scythe is to reap souls, despite Grim only has shown that three times of which two were in Powerpuff Girls Doujinshi and one in Grim Tales. When reaping a someone it means that the reaper takes away the soul of the body, making it an empty vessel. This still can be done even if there is little soul left, as in Samantha's case. Grim takes the souls and sends them to the location they should go which is either Heaven or one of the realms of the Underworld. The scythe can open rifts to 'the other side' its main purpose being to open the way for the souls of the recently deceased to pass through. Grim has also used it to open inter-and-extra-dimensional portals and rifts in the fabric of time and space.

A secondary function of the scythe is for melee combat. The scythe has the ability to cut and slice through anything and. Anything that has been cut by the scythe's blade cannot ever be repaired. Although not shown in the comic, but in the original cartoon, the scythe can also cast spells. The scythe's blade can be used to fire bolts of energy at targets, give off light, deflect incoming energy blasts and put up protective barriers and the handle can be used like a Lightsaber. 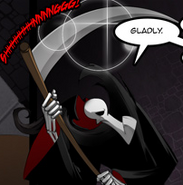 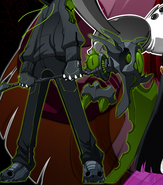 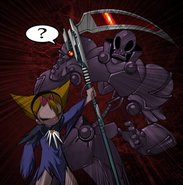 Scythe 2.0
Add a photo to this gallery
Retrieved from "https://snafucomics.fandom.com/wiki/Scythe?oldid=55166"
Community content is available under CC-BY-SA unless otherwise noted.