Sabrina "Brina" Thompson is a character created and being owned by Griddles.Sabrina is a Mindcaster. There is a puff-version that resembles Brina, which belongs to Gamefan PPG, However, these two characters have nothing to do with each other besides sharing the same name and color.

She's discovered by Biohazard, one of the members of the Trinity who leads the pro-transhuman sect called Helix. Biohazard quickly discovers similarity between Sabrina and herself, such as a restless nature, mischievous personality and an overall lack of respect for order and discipline. Bio takes Sabrina under her wing to hone her abilities, eventually making her one third of the New Trinity. Sabrina is happy to accept Bio's offer of tutelage and she allows her school grades to slip further and further as she continues to get lost in her own little wonderland. Sabrina's active and rather mature-minded nature allows her to easily manipulate other peoples' actions for the benefit of herself or her friends. She's a classic example of the meddling and deceptive teenage girl and she is not to be underestimated!

Sabrina is a boisterous, talkative, easily-distracted young teenage girl. She's extremely sociable but can sometimes be rude without meaning to be. One of her most obvious traits is her incredibly vivid imagination - she is able to get wild ideas and thoughts from the simplest of things. This is very important toward her ability as a Mindcaster - a special individual who can bring their thoughts into physical form and break the barriers between fiction and reality. Sabrina, or Brina to her friends, is able to project figments of her imagination from her body as an extension of herself. These figments appear as glowing green light or vapoury wisps. They are strongest if they remain connected to her in some fashion - if they were to detach from her, they would degrade and rapidly die out. Sabrina often immerses herself in books in her spare time in order to widen her imagination and conjure new ideas. 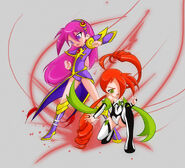 It's Them Against the World 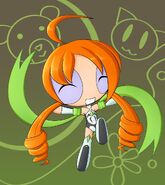 Add a photo to this gallery
Retrieved from "https://snafucomics.fandom.com/wiki/Sabrina?oldid=57218"
Community content is available under CC-BY-SA unless otherwise noted.