Robot X-5 is a minor character of Powerpuff Girls Doujinshi. X-5 appears in the side-story The Forgotten and is originated form the Cartoon Network show, Atomic Betty.

He went along with Atomic Betty and Sparky into Vexus' ship but they shortly was discovered by her, and she sended her minions to them. They tried to escape when suddenly a crane of a Toybot grabbed Sparky and crunched him. Robot X-5 was quickly followed when Protoboy ripped him apart. Betty managed to get his head right before they go into lightspeed, and his head is later seem floating in space along with the ship's wrecks a barely alive Betty, and it looked severely damaged and possibly deactivated.

Later, in "Entering a Transitional Period - 2005-2010", a bonus comic that recaps all Powerpuff Girls Doujinshi chapters, it was confirmed that Betty was the only survivor of Vexus's attack, meaning that Robot X-5 died.

X-5 is a shiny squared yellow-colored robot. He has light-blue eyes and a gray bar as mouth. He has an attena on his head and round on the sides of his head acting as ears. In the chest of his body is a speaker where he speaks through and underneath in big letters "X-5". He has gray arms with claws and no feet, as he hovers above the ground.

As a Galactic Guardian, X-5 is a trained robot for combat although he prefers to use the weapons that he has installed inside of him, for example his laser. He is able to hover above the ground and is pretty fast.

X-5, the third member of Betty's crew, is a roughly rectangular, yellow, hovering robot. He tends to spout too much information at inopportune times and takes things exceptionally seriously, which usually grates on Sparky's nerves. The two of them have a grudgingly respectful working relationship. Though it is implied that he is an outdated robot model, newer model robots have tended to be less reliable. In the third season, he also becomes an inventor, inventing new gadgets that are used by Betty on her missions. When he visits Betty's home, he tries to "improve" upon the kitchen appliances in Betty's house, thinking that this technology (like most technology on Earth) as being primitive. 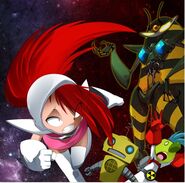 Robot X-5 with Atomic Betty, Sparky and Vexus in the PPGD Anniversary page "Entering a Transitional Period - 2005-2010".
Add a photo to this gallery
Retrieved from "https://snafucomics.fandom.com/wiki/Robot_X-5?oldid=62978"
Community content is available under CC-BY-SA unless otherwise noted.