The Pumpkinator is an antagonist in Grim Tales. He works for Oogie Boogie and remained the main enemy of the first arc, although he later transforms into the Demon Reaper.

After Minimandy defeated Oogie Boogie, she took Grim Jr. with her but Oogie summoned the Pumpkinator who grabbed Minnie and literally ripped her apart piece by piece. When Grim Jr. got his Demon powers from Minnie he killed the Pumpkinator and merged into it, becoming the Demon Reaper. It was defeated by the combined efforts of Clockwork, Grim, Nergal, Dan Phantom, and Nergal Junior

30 ft tall, the Pumpkinator is shaped like a jack-o'-lantern with two arms and two legs. It also wears a horned helmet on it's head, and has vine appendages which dig into the surface of the planet while it is counting down to explode. A countdown timer appears out of its helmet when it is about to destroy itself and the planet it is on (it is somewhat immune to the explosion since in the TV special Timmy was watching, its separate Jack-O-Bot components were able to survive and go off in search for another planet to destroy). It is equipped with rocket lauchers in its shoulders and a powerful flamethrower in its mouth.

The Pumpkinator is a villain of the Crash Nebula show. A real version of the Pumpkinator appeared in Fairly Odd Parents, after Timmy's wish turned the popular kids into actual Jack-O-Bots, who merged together to form this entity. 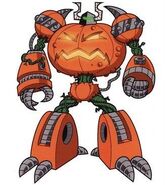 The Pumpkinator as in Fairly Odd Parents 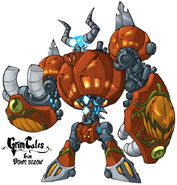 Add a photo to this gallery
Retrieved from "https://snafucomics.fandom.com/wiki/Pumpkinator?oldid=61052"
Community content is available under CC-BY-SA unless otherwise noted.