Professor Cricket is a character in Ever After.

Professor Cricket is the professor of Everafter. He was having a conversation with Dr. Crooked about Red Riding Hood. He said that she was recovering faster than previous times. He saw in her mind next to Grandmother's Cottage and the sillouette of the man the Big Bad Wolf that was terrorizing her. Dr. Crooked said to hurry because her next session was in two hours. Although Cricket first thought it was a bad idea he eventually agreed.

Professor Cricket is probably based of from the Talking Cricket from Pinocchio. The Cricket, who has lived in Geppetto's house for over a century, makes its first appearance in chapter IV where he explains to Pinocchio, whose mischief has landed his creator Geppetto in prison, that he must either attend school or get a job in order to function properly in the world. When Pinocchio refuses to listen, the Cricket expresses sympathy to Pinocchio because "you are a puppet, and what's worse is that you have a head of wood". In response, Pinocchio throws a mallet at the cricket, seemingly killing it. 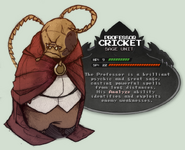 Professor Cricket in Everafter Tactics
Add a photo to this gallery
Retrieved from "https://snafucomics.fandom.com/wiki/Professor_Cricket?oldid=55104"
Community content is available under CC-BY-SA unless otherwise noted.