Professor Çocoa is a minor character of Sugar Bits. He is a moose, probably made out of chocolate, and the Sugar Core Chief Supervisor and a professional scientist. He often is accompied by Hansel Gingerman during his experiments.

Professor Çocoa is a choclate moose who supervises the creation of "Zest" and can only communicate by blowing raspberries. He first appears at the lab along with Hansel when they get attacked by Kaveeteh. He later appears when he had opened a portal to the Underworld.

He appeared later when Gingerman was waiting in the hospital to visit Bo. He walked towards him along with Nurse Jellybean. While Jellybean explained Bo's situation to Gingerman, Professor Çocoa just stood in the background wondering around.

Professor Çocoa is a chocolate moose, or a moose with chocolate brown fur. He wears swirled pink glasses and has a yellow antlers. He wears a white labcoat that is a little bit to big for him as his hooves can't be seen because they are in his sleeves. In addition to that he also wears a pink and white striped tie. 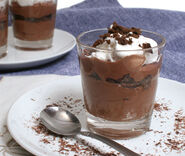 A Chocolate Mousse
Add a photo to this gallery
Retrieved from "https://snafucomics.fandom.com/wiki/Professor_%C3%87ocoa?oldid=55109"
Community content is available under CC-BY-SA unless otherwise noted.