The Powerpuff House is the new suburban home of the Powerpuff Girls and Professor Utonium. The house appeared in several scenes of the comic. Mostly before or after an important event.

The house consists out of several chambers. When you arrive, you come at the lounge further is the living room and the kitchen. Upstairs are the chambers of the girls and Professor Utonium. Under the house is his lab. For the rest there are mostly halls and two bathrooms. 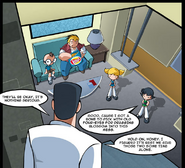 Dinner Room
Add a photo to this gallery
Retrieved from "https://snafucomics.fandom.com/wiki/Powerpuff_House?oldid=55097"
Community content is available under CC-BY-SA unless otherwise noted.