The Powerpuff Girls is a team of transhuman girls who are were created in an accident by Professor Utonium, but really created by Mojo Jojo. They were created from sugar, spice and everything nice until another ingredient was added to the concoction, Chemical X, which was added because of Mojo Jojo. This resulted in the birth of Blossom, Bubbles and Buttercup. The girls themselves tried to make another sister, adding the wrong ingredients causing her to appear much different than she was supposed to, but because of this also was unstable and faded from existence. The Powerpuff Girls appear as the main characters in Powerpuff Girls Doujinshi and their life at school.

All the Powerpuff Girls have basic powers including: 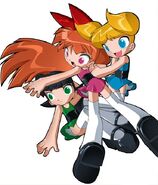 PPGZ
Add a photo to this gallery
Retrieved from "https://snafucomics.fandom.com/wiki/Powerpuff_Girls?oldid=62143"
Community content is available under CC-BY-SA unless otherwise noted.