The Powergloves (also refrered as Gauntlet or Battle Glove) is a weapon featured in Powerpuff Girls Doujinshi used by Dexter and Mandark.

Dexter used the Gauntlet to fight Mandark (even he used also a Gauntlet), to save Blossom, and beat Mandark. Dexter freed Blossom by destroying his Battle Glove, but he was already too late, Blossom was dead (But not really).

Later on, during the invasion of the Cluster Bugs, Dexter used the Powergloves to battle against the Cluster Monster, using tech-weapons such as missiles. However, Dexter was no match for the behemoth, so he retreated to the haven where everyone was evacuating to.

The Gauntlet is a name for several different styles of gloves, particularly those with an extended cuff covering part of the forearm. Gauntlets exist in many forms, ranging from flexible fabric and leather gloves, to mail and fully articulated plate armor. 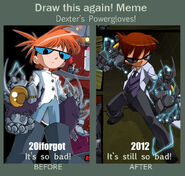 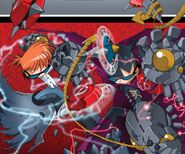 Actual fighting of Dex and Mandark with their gauntlets. 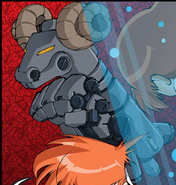 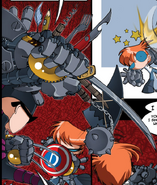 Rocket Jet
Add a photo to this gallery
Retrieved from "https://snafucomics.fandom.com/wiki/Powergloves?oldid=55079"
Community content is available under CC-BY-SA unless otherwise noted.