Oogie Boogie is a major antagonist of Grim Tales. He appears in Chapter 2 and 3 as the main villain and is later only mentioned. He is a previous partner of Grim and, non-cannonly, Boogeyman. He originates from the Tim Burton film, The Nightmare Before Christmas.

When Lock, Shock and Barrel captured Grim Jr. he KO'd him after telling the story with a baseball bat and tied up up in his Torture Chamber.

He wanted to cut open the head of Grim Jr. to see his Reaper powers. Suddenly Minimandy came in and shot an arrow through his hand. Then he summoned some cards and cowbots that started to attack Minnie, but she destroyed them all. Then she slammed Oogie KO but let him stay alive. When Minnie walked away with Grim Jr. Oogie summoned the Pumpkinator that grabbed Minnie and bisected her. After Grim Jr. got his Demon powers from Minnie he slayed the Pumpkinator and merged into it and killed Lock, Shock, Barrel and Oogie.

Oogie's outside appearance is very simple. He is covered from head to toe in a grey burlap sack, and an obvious seam is visible along the sides. Oogie is quite rotund, with stumpy legs and fingerless arms, a stark contrast to Jack Skellington's gaunt, tall physique. Like Jack, the "eyes" in Oogie's head are featureless black holes, as is the inside of his mouth. The tip of his head extends outward and flops down, vaguely resembling Jack's Santa hat. On the inside of the sack, Oogie is a huge mass of a variety of different colored bugs. In the movie, Oogie also produces a snake from his mouth as a "tongue" to intimidate Santa Claus by hissing at him. The majority of Oogie's consciousness is held by one, green, earwig-like bug in his head, and it is only by squashing this one that Oogie can be killed.

Oogie Boogie is the antagonist of the The Nightmare Before Christmas. He is a burlap sack filled with insects, and a snake for a tongue. It is likely he is the legendary Boogeyman, as suggested by the boogie in his name. The boogeyman was also known to cause sheer horror in the dreams of mortals, this also hinted in This Is Halloween as the shadow in the moon is described as filling the dreams of mortals to the brim with fright.

Oogie Boogie as in The Nightmare Before Christmas 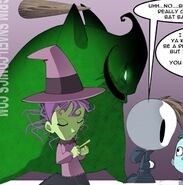 Chibi Oogie Boogie
Add a photo to this gallery

Retrieved from "https://snafucomics.fandom.com/wiki/Oogie_Boogie?oldid=55064"
Community content is available under CC-BY-SA unless otherwise noted.