Nool is a major antoganist from Powerpuff Girls Doujinshi. He is a member of the Darkstar Council.

Nool was one of the five Cluster robots who made up the Darkstar Council that aided Dr. X in his plans at Black Eden. He was responsible of letting Zim join on their side. The Almighty Tallest talked him into recruiting him, unbeknownst that Zim was useless. He later appeared again right after Mandark did a suicide attack, he mentioned that Bell was awake and was sounding upset.

The next time we see Nool is when he crossed through the portal from Black Eden to the Megaville Center for the Arts along with the rest of the Darkstar Council. Nool immediately went to Jenny and attached himself to her, not only to keep her in check, but also to release big hoards of Cluster troops. He stayed attached to Jenny until he was smashed into pieces by the Rowdyruff Boys. The remains of his body were last seen scattered all around over the stage near Jenny, while his head was in Butch's hands... at least until Brick took it and crushed it while arguing with the Powerpuff Girls.

Nool played a minor role in Black and White. He was a member of the Darkstar Council but during a conversation with Barasia he got killed by her for saying something wrong.

Nool looks like an insect, as that is with all the robots from the Cluster Zone. He is a thin and rather tall grasshopper-like robot. He has big sharp claws and several spikes on his back. Like most robots his limbs are attached with each other through twisted cables. 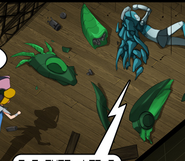 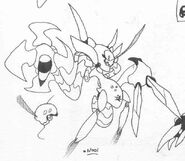 Nool's original design by Kainsword17.
Add a photo to this gallery

Retrieved from "https://snafucomics.fandom.com/wiki/Nool?oldid=61202"
Community content is available under CC-BY-SA unless otherwise noted.