Noisy Cricket is an object featured in Powerpuff Girls Doujinshi. It originates from the movie series Men in Black.

It was used by the Men in Black when the Cluster infiltrated into the science fair. One of the Men in Black agents used it against Bell, who only found it cute, and kicked the man afterwards. Bell took the Noisy Cricket along with her down the hole and held it behind her back when confonting Blossom. She shot at Blossom, but she managed to dodge it and she kicked the gun out of her hands.

A Noisy Cricket is a small pistol-like weapon with a small grip and pointed barrel. It fires a powerful orb of energy, creating the sound of a cricket. It produces a strong recoil that can launch its user if he or she is not careful. It can also be suppressed to reduce the recoil, but this reduces its power. In the spin-off book, the MIB Agent's Handbook, explains that Noisy Crickets are deliberately given to rookies, and bets are taken on how far the rookie will fly as a result of the gun's recoil (a practice discouraged under MIB's 'No Hazing' policy). 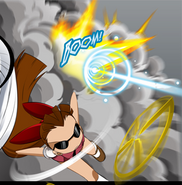 The effect of the shot

Noisy Cricket in MiB
Add a photo to this gallery
Retrieved from "https://snafucomics.fandom.com/wiki/Noisy_Cricket?oldid=55046"
Community content is available under CC-BY-SA unless otherwise noted.