Nergaling, or Nergal Demon, is an unique demonic race residing in the Underworld but also in the Living World. Most Nergalings hunt down demons in the Underworld for money and some are in the army of Queen Mandy and are send on missions by her.

The Offering of the Right EyeEdit

A rather substantial gesture amongst the Nergalings, the offering of the right eye signifies the transfer of one's power to another. When a Nergal Demon is on the precipe of death, it will search for a host, a sort of symbiote to which the dying creature will offer all of its power. Should this host accept the Nergaling's offer, an extreme transformation will begin. The host will thereafter become a Nergaling themselves, but during this stage of transformation the new carrier will experience all of the former Nergaling's lifetime experience. Like a highlight reel, only more defined. He will experience its past life, its memories, its dreams, emotions, pain and perhaps even its biggest secrets.

Though it does have its negative side-effects. If the host is in misery and cannot handle the power, the inner Nergal Demon will take over the body for its own plans. The host will have to learn to control the Nergal powers so it obeys them. This can be done best through Nergal language.

The Offering of the Left EyeEdit

When a Nergaling offers the left eye it will signify the love to the other and will conclude in marriage. This can only be stopped when the eye is pulled back out of the other's eye and thus can be placed back in the empty eye socket of the Nergaling. Nergal commented that this has led to some embarrassment for Nergals when they accidentally give their left eyes instead of their right eyes.

Nergalings are known to dress themselves in dark clothing, thus mostly black and red. Nergal, Nergal Jr. and Grim Jr. all wear black clothing with sometimes some red and green in it. They also wear these clothes to hide their true appearance which mostly looks like a giant monster.

Nergalings are small (just a bit smaller than Billy and Mandy) creatures that look like Nergal. They are mutant/monsters just like Nergal. They appear in Love is Evol Spelled Backwards, rushing out when Nergal's house/spaceship/car door opens. They also appear in Something Stupid This Way Comes, where Nergal fails to make friends again, and uses his tentacles to turn everyone into mutant/monsters. If you look really closely at the part where Nergal sings "Friends", the mutant/monster directly behind him is a Nergaling. 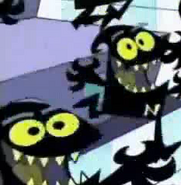 Nergalings as in Grim Adventures of Billy & Mandy
Add a photo to this gallery
Retrieved from "https://snafucomics.fandom.com/wiki/Nergaling?oldid=60663"
Community content is available under CC-BY-SA unless otherwise noted.