Nemo is a character from Sugar Bits and a main character of the spin-off, Robin Rescue. He appears in Sugar Bits since Chapter 3 where he meets Hansel Gingerman.

Nemo first appeared when Robin offered Hansel a ride on him and requested him to stand on top so Nemo could eat him, but that failed.

Later Nemo tried to eat Brave who wanted to save Robin, but Brave beated him up. Later he was getting fixed by Brave with some tape. Brave went away to get firewood. They got attacked by monsters and were almost losing until Nemo ate one of them in one bite, which also solved his hunger problem.

When they join the battle Nemo's arm got sliced off by Red Riding Hood. Later he keeps Robin and Gene inside of him to keep them save. After some time he got attacked by a giant wolf and fought it until the fight was over. Nemo's injuries were healed and was sent back. He, along with Robin, became a Brave Heart and has been given the proper upgrades to handle his missions.

Nemo appears as one of the main characters in the new spin-off comic from Sugar Bits; Braveheart Quest Robin Rescue. He has become a Brave Heart too (although it isn't known if he attended the Courage Campus) and now goes on missions with Robin, acting, like always, as her ship.

Nemo is a large shark like fish that roams the water with Robin. Unlike many sea creatures, Nemo has legs and fin like arms which gives him capability of walking on land. Like a Transformer, Nemo is able to hide his lower body underwater and diguise himself as a boat. 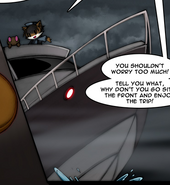 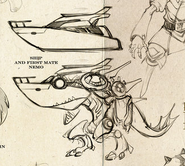 Nemo in Robin Rescue
Add a photo to this gallery
Retrieved from "https://snafucomics.fandom.com/wiki/Nemo?oldid=55035"
Community content is available under CC-BY-SA unless otherwise noted.