Mr. Snuggles is a character in Grim Tales. He is the pet of Billy and later of Mandy, after Billy died. He originates from the Cartoon Network show, The Grim Adventures of Billy & Mandy.

Grim Tales From Down BelowEdit

He made an appearance in Grim Tales What About Mimi. When Mimi entered Mandy's Vault he could be seen in one of the capsules only now very old (since he can't die because Grim doesn't come to get him anymore) but still wears his birthday hat. He was seen later on being picked up by Grim laying on his head and being gently scratched by him as well.

Mr. Snuggles is a very old hamster. In Powerpuff Girls Doujinshi he still has brown fur and is still very active. After many years have passed he looks different in Grim Tales. His fur is now gray and has darker-gray spots on his back instead of dark-brown. He still wears his party-hat from the day he actually would've been killed.

Mr. Snuggles in its pod 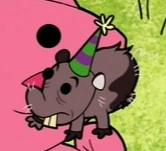 Mr. Snuggles as in The Grim Adventures of Billy and Mandy
Add a photo to this gallery
Retrieved from "https://snafucomics.fandom.com/wiki/Mr._Snuggles?oldid=55025"
Community content is available under CC-BY-SA unless otherwise noted.