The Moon (also refered as Luna) is a location in Powerpuff Girls Doujinshi.

Bell and GIR went to their for a mission for her dad. She activated a machine after that she noticed the space suits were gone. Naga gave them to her and she left.

The Moon is the only natural satellite of the Earth, and the fifth largest satellite in theSolar System. It is the largest natural satellite of a planet in the Solar System relative to the size of its primary, having a quarter the diameter of Earth and 1⁄81 its mass. The Moon is the second densest satellite after Io, a satellite of Jupiter. It is in synchronous rotation with Earth, always showing the same face; the near side is marked with dark volcanic mariaamong the bright ancient crustal highlands and prominent impact craters. It is the brightest object in the sky after the Sun, although its surface is actually very dark, with a similar reflectance to coal. Its prominence in the sky and its regular cycle of phases have, since ancient times, made the Moon an important cultural influence on language, calendars, art andmythology. The Moon's gravitational influence produces the ocean tides and the minute lengthening of the day. The Moon's current orbital distance, about thirty times the diameter of the Earth, causes it to appear almost the same size in the sky as the Sun, allowing it to cover the Sun nearly precisely in total solar eclipses. 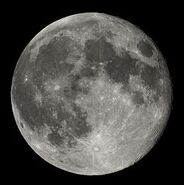 The Moon when firing a giant laser.
Add a photo to this gallery
Retrieved from "https://snafucomics.fandom.com/wiki/Moon?oldid=41949"
Community content is available under CC-BY-SA unless otherwise noted.