Mint is a recurring character in Sugar Bits. Mint is a white bunny and the pet of Cupcake. He appears in Chapter 1, 4 and 7 alongside with Cupcake, like he always is.

Mint is a little white bunny wearing a purple collar. He sometimes equips different attachments like a pink sleeping hat or a pink scarf. 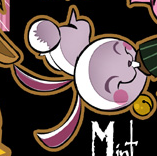 Add a photo to this gallery
Retrieved from "https://snafucomics.fandom.com/wiki/Mint?oldid=56377"
Community content is available under CC-BY-SA unless otherwise noted.