The Mighty Orbots is a character who appears in Powerpuff Girls Doujinshi. It first appeared in the side story The Forgotten and later appeared again in chapter 11. It originates from the show of the same name, Mighty Orbots.

Tor first appeared alongside other robots in the army of Vexus in the side story The Forgotten. He did nothing. When Vexus discovered that Atomic Betty and her team had entered the ship, she commanded Tor to attack her. Tor ripped the door open and let the other robots attack. Betty managed to escape with Robot X-5's head in the starcruiser althought the ship was ripped apart by Tor during their escape.

The robot appeared once again in Chapter 11 where he was attacking one of the snack pods of The Massive.

The Mighty Orbot only has shown to have brute strength, and although not displayed has also the capability of flight.

The MIghty Orbots is a huge robot who is made out of six different robots. 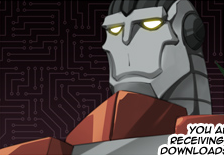 A boastful, burly brute-sized male robot with a voice like Link Hogthrob, he is the strongest of the five team members. Although quite often portrayed as being a bit slow and with a very high opinion of himself, Tor had the ability to think on his feet during battles with SHADOW monsters and henchmen. Kind and supportive towards his friends although often with a good-naturedly egotistical macho attitude that annoys his female team mates, Tor sometimes is the de facto leader (when Rob – as the Orbots Commander – isn't leading them directly at the time), but he will take cues from the others when the situation merits it. Tor's primary colors are silver, red and blue. When forming the gestalt form of Mighty Orbots, Tor retracts his arms and legs into himself to form the central body and head. 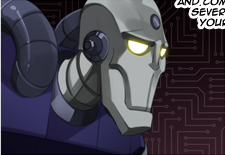 A gaunt-thin male robot with a nervous personality and a voice like Lou Costello, he is the one member of the team that is the most handy due having been built with quick-change circuits and other abilities that allow Bort to reconfigure himself into literally any machine or device he can think of. Often showing a lack of confidence in himself, Bort is portrayed as being clumsy, indecisive and self-depressive. Yet, when the chips are down, Bort always comes through in the clutch for his team. Bort's primary colors are silver and blue. When forming the gestalt form of Mighty Orbots, he retracts into a boxy unit that forms the lower right leg. While connected, he can use his quick-change circuits to modify the hands of Mighty Orbots into a variety of offensive and defensive weapons. 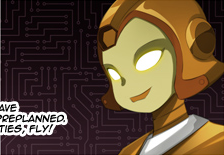 One of the three female robot team members she is most outgoing, assertive and confident female on the team. Sometimes she likes to play practical jokes, but at times they can backfire (like when she removed Crunch's appetite chip, only to have it broken when they needed it in the episode "Trapped on The Prehistoric Planet"). She is a caring soul and will do what she can to support her team mates. She has the ability to manipulate the elements – fire, water, wind, etc. – to use in a myriad of offensive and defensive effects (whirlwinds, water geysers, etc.). Bo's primary colors are pale yellow and orange. When forming the gestalt form of Mighty Orbots, she transforms in the left arm, which forms a hand after it is connected to the main body. Through her connection, she can channel her elemental powers throughout the body of Mighty Orbots. 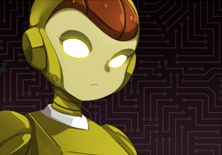 The second female team member and twin sister to Bo, she is the shyest member of the team, yet she can prove to be as brave as her twin in combat, even standing up for herself and others (especially when Bo's pranks go too far). Boo has the ability to create and manipulate effects on light and energy that would appear to be "magic"; she can turn herself and others invisible, create force fields, levitate objects and even teleport. She can also channel energy to form optical illusions and holograms. Boo's primary colors are white and yellow. When forming the gestalt form of Mighty Orbots, she transforms into the right arm of the giant robot. Like Bo, she can channel her defensive abilities throughout the larger body, allowing it to benefit from all of her "magic" effects. 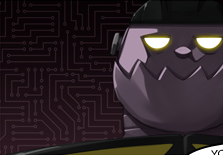 A stoutly robust (sic "chubby") male robot who's personality seems to be focused on one thing; simply put, Crunch loves to eat. His prime ability – coupled with his steel trap-like jaws and teeth – allows him to consume ANY materials available (metal, stone, glass, circuits, garbage, etc.) and digest it so it can be converted into energy. Often he's a subject of comic-relief due to his eating habits. Crunch seems simple-minded, but he does prove to have some brains, and is a good friend and a steadfast supportive personality. Crunch's primary colors are purple and black. When forming the gestalt form of Mighty Orbots, Crunch forms a boxy unit that forms the lower left leg. While connected, Crunch also serves as the back-up power source for the giant robot, and at times will detach so he can "chow down" on any available items to give his team mates a much-needed power boost. 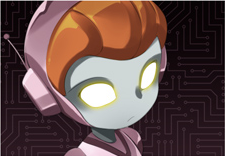 The sixth robot of the team, so named for her propensity to exclaim "Oh no!" and quite possibly the most important of them all, Ohno resembles a small, female child in size and demeanor with the "mother hen" personality of a bossy little sister that can often get on the nerves of Rob and the others. Feisty, yet supportive in her role as Rob's assistant, Ohno helps keep the lab running and the rest of the team in line. At times she feels neglected and unappreciated, but through thick and thin she's always there to lend the team a hand (and a nag when needed). Ohno's primary colors are pink, red and white. When Mighty Orbots forms its gestalt form, it's Ohno that completes the final circuit "link" that allows the full power of the giant robot form to come online. Without this vital piece, Mighty Orbots cannot become fully functional (a flaw that was exploited once by Umbra, under the machinations of the Shadow Agent called Plasmus, in the episode "The Wishworld"). If necessary, Ohno can operate the controls alone for basic functions, but combat is simply too demanding without the Commander on board. Ohno also carries the repair tools and recharge kit needed should the Orbots be caught off-world away from their base recharge chambers. 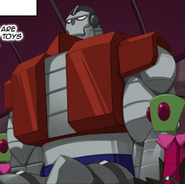 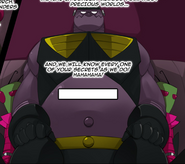 Tor in original cartoon.
Add a photo to this gallery
Retrieved from "https://snafucomics.fandom.com/wiki/Mighty_Orbots_(character)?oldid=54994"
Community content is available under CC-BY-SA unless otherwise noted.