The Metal Hand is one of the weapons used to be owned by Hoss Delgado. It appears in Grim Tales. It appears in chapter 7 and originates from the Cartoon Network show, The Grim Adventures of Billy & Mandy.

It makes it's first appearance in the background in Mandy's Vault.

It later appears when still attached to Hoss Delgado. Hoss uses it to fight The Lava Monster by changing it into a machine gun. He later uses it to choke HIM and pulls out a nuclear bomb to kill HIM. It only doesn't work and Hoss died while HIM, as a giant monster, with the metal hand in his tongue. 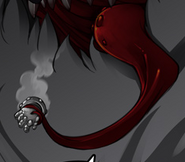 Hoss' metal hand after he died 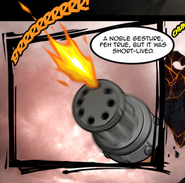 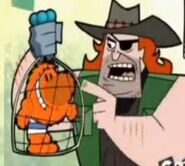 Hoss' metal hand in Billy & Mandy
Add a photo to this gallery
Retrieved from "https://snafucomics.fandom.com/wiki/Metal_Hand?oldid=54991"
Community content is available under CC-BY-SA unless otherwise noted.