The Mental Institute Everafter is the location where Everafter takes place.

It is a mental institute for children who are traumasized by events that had happened in their life. They experiment with the children and try to recover them. 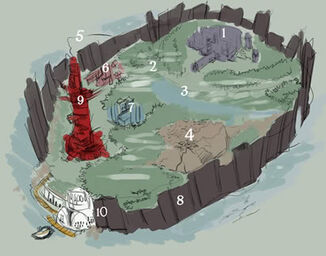 1. The Asylum - Everafter is a monument to either genius or mania in terms of its design, combining the practical banality of a medical institution with the grandeur of gothic architecture. This includes all the standard parts of any given asylum, kitchens, inmate corridors, administrative offices, laundry, medical wings, etc. Feasibly, your character could spend every match in here. It’s quite big.

2. Misty Woods - Most of the island is covered in thick forested areas, with crisp, cool fog blanketing what areas trees don’t possess. Visibility is quite poor.

3. The Moat - As if cells, reinforced doors, armed guards and gigantic walls weren’t enough, the heads of the asylum thought it best if they dig a tremendous moat around the perimeter of the asylum. That’s cold.

4. Craggy Canyon - (You must be this tall to enter Craggy Canyon.. ) The canyon is basically a big rocky area with a chasm running a length of a ways through, with rough, uneven footing.

5. The Bluffs - The cliff area outside the great walls don’t lead to very much, outside of a couple hundred feet drop into the ocean. But then that’s one way to defeat an opponent..

6. The Faculty Residence - Being on a remote island for work either means you get yourself a dormitory, or face a four to five hour commute coming and going. Most of Everafter’s grunts, nurses, janitors and such have a tiny housing area to call their own when they aren’t mopping up limbs or sedating gibbering flesh-eating youths.

7. The Labs - A large compound for experimental medicine, research and technology, as well as an animal stockyard. Surrounded by a giant protective fence on all sides.

8. The Wall - The perimeter of the island is dominated by gargantuan walls, stuck together quite haphazardly like great fused sheets of metal.

9. The Control Tower - If a tornado managed to pick up about four dozen gothic cathedrals and slammed them all together, it’d look like the Control Tower. This is where the most esteemed of the asylum’s faculty remain, making sure things stay honky dory in the asylum from afar. It is the tallest establishment on the island, a tapering spire reaching far into the overcast sky.

10. The Port - For public relation purposes, the asylum holds tours now and then to display their technological prowess and good intentions. And most nobles from the mainland don’t like traveling Air Big Bad, so a port suffices.

The Island of Ever After 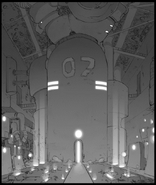 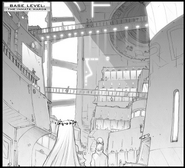 Base Level: The Inmate Ward
Add a photo to this gallery
Retrieved from "https://snafucomics.fandom.com/wiki/Mental_Institute_Everafter?oldid=54989"
Community content is available under CC-BY-SA unless otherwise noted.