The Megaville Center for the Arts is a giant building located in Megaville.

The science fair was being held in this building. The greatest scienctists came here like Nora Wakeman, Professor Utonium, Professor Membrane and Weasel.

There was also a dance preformance at the theatre from the girls from the Megaville Elementary. Suddenly GIR jumped on Nora's head to the podium. Jenny walked to him but suddenly GIR put a button on her head and she became a portal. All kind of Clusters came out and attacked everyone. Everyone got evacuated, the only ones there were Blossom, Bubbles, Buttercup, Olga, Dexter, Mrs. Honeydew, Jack, Jenny and Courage. Everyone started attacking. Blossom got into a fight with Bell and Buttercup along with Jack with Samantha. Olga was almost killed by one of the Darkstar Council until Monkey appeared who protected everyone. Meanwhile a giant Cluster digged a hole in the ground and Bell followed. Undergrounds the security started attacking. Bell escaped through another hole, followed by Blossom who is followed by Samantha. Buttercup was aslo in the undergrounds beating the giant Cluster. The other people evacuated to the Megaville Skyway Hangar and hid there while the Cluster was coming for them. Dynamo managed to hold them away temporary but got shut down. Then there was a sudden explosion that killed everyone in and around the building, probably whole Megaville. 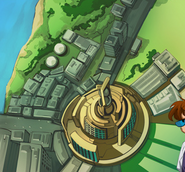 Center for the Arts as seen from above 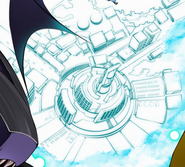 Center for the Arts as seen from above during the explosion
Add a photo to this gallery
Retrieved from "https://snafucomics.fandom.com/wiki/Megaville_Center_for_the_Arts?oldid=54983"
Community content is available under CC-BY-SA unless otherwise noted.