Megas, which stands for Mechanized Earth Guard Attack System (eXtra Large Robot), is a giant robot that appeared in Powerpuff Girls Doujinshi. The robot made it's first appearance in Chapter 3 but became important in Chapters 5 and 6. It originates from the Cartoon Network show, Megas XLR.

When Dexter went to save Blossom from Mandark he used the Megas to invultrade Mandark's Laboratory. But he couldn't use it without that Coop went along with him so he did.

The Megas fought the Megabee from Samantha and destroyed it.

Megas is a giant blue humanoid robot with a red V-8 car on top of it. On the legs and in the chest of the robot yellow flames were sprayed.

The Megas is a robot founed by Coop from the Cartoon Network serie Megas XLR. It was the main robot Coop and his team fought with. its from the future. 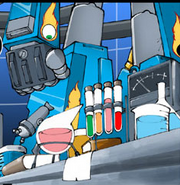 Megas in the future (probably with Coop inside)

Ballirina
Community content is available under CC-BY-SA unless otherwise noted.