Mandroid is a minor character from Grim Tales. She is created by Creeper and is the security system in Mandy's Vault. She originates from the Cartoon Network show, The Grim Adventures of Billy & Mandy.

Grim Tales What About Mimi?

She, together with Billybot, is the guard of Mandy's Vault. Billybot first shot a cup of yogurt at Mimi. The yogurt didn't do any damage to her at all. Mandroid then fired a laser out of her fingers to Mimi who was able to reflect it with a handmirror she grabbed, and killed Billybot with the reflecting laser. Mandroid immediately rushed to Billybot, and cried over his dead body when suddenly Mimi slammed a crane into her head, and opened the switch. Water then flooded into her systems, and she died too.

Mandroid is a robotic version of the younger Mandy. She has a dark brown metal body and wears a pink dress, similiar to Mandy when she was young, with a pink stripe on the edge. Instead of having a flower on her chest she has a pink orb. Her hair is exactly the same and even has a hairband. She has pink glowing eyes and a yellow mouth.

Only one of Mandroid's abilities is seen, which is too shoot lasers out of the fingertops of her hand. She also is slightly smarter than Billybot. Her only disadvantage is that she can feel emotions, as shown when she cried about Billybot's death which costed her life.

Mandroid was a robot version of Mandy but malfunctioned because after she cornered Billy, Mandy, Irwin and Grim, she aimed a laser at them and said, "Please surrender yourselves and you will be assimilated." Mandy told her that if she is supposed to be her, that means she doesn't say "Please," she doesn't assimilate, and she doesn't take orders from anyone, including the Boogey Man. 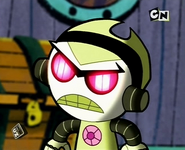 Mandroid as in the Grim Adventures of Billy & Mandy 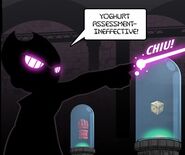 Died
Add a photo to this gallery
Retrieved from "https://snafucomics.fandom.com/wiki/Mandroid?oldid=61624"
Community content is available under CC-BY-SA unless otherwise noted.