Manager is a character without an official name who appears in Skull-Boy. He is the manager of the restaurant, Seven Circles of Pizza.

Manager first appeared when Skull Boy and Eight-Bit visited the Seven Circles of Pizza. However when they arrived Skull Boy was confronted by the Manager who said that he was late for work, although Skull Boy forgot that he worked there. He put Skull Boy to work in his clown suit and went on with his business. He then discovered that four children were missing at the party. Manager then decided to fire Skull Boy and said to Demon Child, thinking he was his girlfriend, to take him home. Demon Child then showed the Manager an ear trick and pulled the skull out of his head.

The Manager briefly appeared in Deliver us Evil being revived again. He didn't fire Skull-Boy and instead ordered him to deliver two pizza's to their destination.

The Manager seems to be a guy in his early 20's although he could be older. He has brown hair, although he also could be a ginger. He wears glasses, has a light skin and many freckles on his face. He is somewhat taller than Skull Boy but not much. He is only seen wearing his uniform which is a red t-shirt, sand-colored trousers and a small white hat.

The Manager seems to have a short temper and quickly yells to other people. He is often too busy to see with his work to see what else is going on. 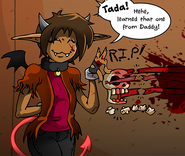 The Manager's death
Add a photo to this gallery
Retrieved from "https://snafucomics.fandom.com/wiki/Manager?oldid=42504"
Community content is available under CC-BY-SA unless otherwise noted.