Unable to care for her daughter, she allowed Lexine to be adopted into a good home before returning to end her involvement with Helix. Lexine grew up never knowing her mother but hearing often of her legacy. She even started to wear an outfit similar to that which her mother wore in her younger days, but with its particular mocha colour to match her eyes. Lexine looks much like Bio and wishes there was some way to meet her mother face to face, if only for long enough to tell her that she loves her so very much. Lexine has been created by Griddles.

Due to a genetic mutation her eyes are brown rather than her mothers' yellow.

Her father is presumed to be the unknown man who her mother disappeared alongside with.

Simple and beautiful. No powers, no fancy abilities or ambition to either enslave the world, change it or unite it. She wears a dress like the one her mother used to.

She wants to make friends, grow up and own a pet rabbit. 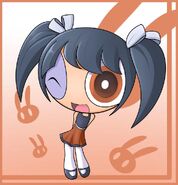 Lexine's School Picture, Art by Razien
Add a photo to this gallery
Retrieved from "https://snafucomics.fandom.com/wiki/Lexine?oldid=61020"
Community content is available under CC-BY-SA unless otherwise noted.