Lady Hope is a minor character in Sugar Bits. She is the mother of Ginger and Licorice and former ruler of Confectionaria, until her death.

Lady Hope died before the story began, she was the queen of Confectionaria. Lady Hope was ill for a long time and Ginger wanted to show her she could make a Gingerbreadman but she kept failing. After some time she eventually managed to create Hansel. Ginger wanted to show Gingerman to her but just received the news her mother had died. Bleed Heart then came to take Lady Hope away to his realm.

It was later revealed that Ginger and Licorice were planning on bringing back their mother in exchange for another life. They first tried to kill Bo, but failed in doing that. But King gave Bleed Heart the amulet that contained Mindsnare in exchange for Bo's life. So that would mean that Licorice and Ginger would get their mother back. Bleed Heart only said she was save, but not if she would be revived. 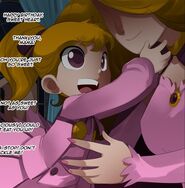 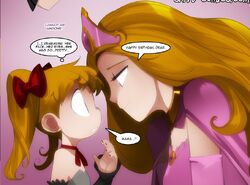 Lady Hope w/Young Licorice
Add a photo to this gallery
Retrieved from "https://snafucomics.fandom.com/wiki/Lady_Hope?oldid=61635"
Community content is available under CC-BY-SA unless otherwise noted.