Kuwagus is a major villain in Powerpuff Girls Doujinshi. He is a member of the Darkstar Council.

Kuwagus was send to Earth by Vexus to help Dr. X. He had a few minor appearances as background character in the beginning but during the invasion at the science fair he digged into the ground to the hidden area. There he battled the Men in Black, but eventually got defeated by Buttercup.

Kuwagus was send to Earth by Vexus along with the other Darkstar Council. He has some speaking lines during conversations with his fellow members. After Montray got killed during the fight between Bell and Barasia he got mad at Barasia for killing him and wanted avenge but ended up being killed himself.

Just like any other Cluster robot he resembles an insect. He resembles a beetle. Kuwagus is a big light-brown beetle, with wings and large mouth. He has two arms (instead of six) and appearantly does have four eyes. 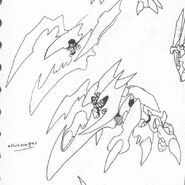 Kuwagus' original design by Kainsword17.
Add a photo to this gallery
Retrieved from "https://snafucomics.fandom.com/wiki/Kuwagus?oldid=54865"
Community content is available under CC-BY-SA unless otherwise noted.