Kerry is a major character in The New Adventures of Skull Boy. Despite confusion amongst readers, Kerry is not the sister of Demon Child and is merely the same species of Devil.

She was first seen working for Ralph Machio and talked about zombies to come to Hell and then you is seen killing the zombies.

She later made her real appearance when she was slaying zombies along with Ira. But when she killed the last zombie her shovel broke and she realized she couldn't pay the rent and a new shovel this way. Suddenly a gooey something hit her and she teleported to the restaurant in the human world. She was totally naked and noticed she was in a ball-pit, there she also encountered a Shark. What happened to her is unknown.

Kerry is a brown female devil. She has yellow eyes and she has purple hair. She has big ears and a red demon tail, she also has two red horns but they are very small. She wears a black leather jacket with a zipper in the middle. She has a black belt and a black skirt with a purple area that has a skull on it. She wears big black boots and black fingertipless gloves. She also wears a black hat with yellow eyes, two small ears and two lines on it.

Kerry is very strong. She can slam zombies to death with one hit of her shovel, only she slammed too hard and broke her shovel. She also is seen with a chainsaw and also in a picture where she practises karate. 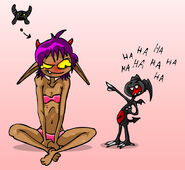 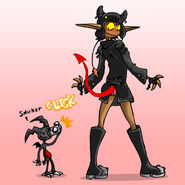 At the Beach (Kitty and Kerry)
Add a photo to this gallery
Retrieved from "https://snafucomics.fandom.com/wiki/Kerry?oldid=49275"
Community content is available under CC-BY-SA unless otherwise noted.