Jack is a character who has yet to appear in Ever After Everafter.

A legend in the fairy tale world.. or a self-proclaimed legend, anyway. He's slain giants left and right.. but has now found a more delectable prey, tucked away in the corridors of the asylum.

Jack and the Beanstalk is an English folktale. The tale is closely associated with the tale of Jack the Giant-killer, and is known under a number of versions. Benjamin Tabart's moralized version of 1807 is the first appearance in print, but "Felix Summerly" (Henry Cole) popularized it in The Home Treasury (1842), and Joseph Jacobs rewrote it in English Fairy Tales (1890). Jacobs's version is most commonly reprinted today and is believed to more closely adhere to the oral versions than Tabart's, because it lacks the moralizing of that version. 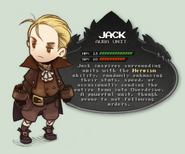 Jack in Everafter Tactics
Add a photo to this gallery
Retrieved from "https://snafucomics.fandom.com/wiki/Jack_(Everafter)?oldid=54813"
Community content is available under CC-BY-SA unless otherwise noted.