The Left Hand of Horror is an object from Grim Tales. It originates from the Cartoon Network show, The Grim Adventures of Billy & Mandy.

HIM sent Mimi to Grim's Castle to get the Horror's Hand for him in order to spare Jeff the Spider's soul from being tormented. She broke into the vault but left the map she had with her behind. She battled Mandy in the vault until Grim came and gave the map to Mandy. She read it and said to give the Horror's Hand to her. When it was shown Mimi walked towards it but when the eye opened it showed Mimi's worst memory, in the ruins of Megaville as a human, seeing the remaining heroes killed and her mother being seperated from each other by HIM

The Left Hand of Horror is a giant wooden hand with and eye forced into it and long red shap fingernails.

The origin of the 'Left-Hand of Horror' occured centuries or millennia before the events of the movie. Horror the Ancient , wanting to rid himself of his fears, got it into his head that in order to do so, he would have to confine all of his fears into a lone body part and then cut it off--and literaly cut himself off from fear. And so, Horror went forward with his plan, magicaly channeled all of his 'fear' into his own left hand and then cut it off at the wrist.

This, however, did not work out as Horror had planned, the act of magicaly channeling so much power in the form of 'fear' into one place, into his left-hand, rendered the hand into an object of awesome power, the 'Left-Hand of Horror' was literally able to bring into life the things that people who would approach the hand fear the most.

On Horror's end of his predicament, the act had not only not rid him of his fears, but had also deprived him of his left-hand--he was a "leftie", and now couldn't even sign his own name--and could not even reclaim it. Since then, now residing on The Isle of Peril, (an island situated in a dangerous section of The River Styx,) Horror was left to stand watch over his 'Object of Power'. 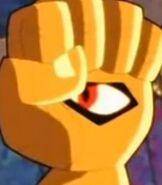 Horror's Hand as in The Grim adventures of Billy and Mandy
Add a photo to this gallery
Retrieved from "https://snafucomics.fandom.com/wiki/Horror%27s_Hand?oldid=54798"
Community content is available under CC-BY-SA unless otherwise noted.