Hell (also refered as Purgatory or Heck) is a location from Grim Tales and Skull-Boy.

This is the place where Billy was banned to, although he later got banned form this place too. It is also the place where Grim lived and where Sally and Satan currently live. This realm can be confused with Land of Tainted Souls which is the realm of HIM.

Not much is known about Hell yet, except that Satan is the ruler of that kingdom. His daughter Satan Kitty probably has much power in Hell, while her long lost brother, Demon Child, is not known in Hell. Kerry is also a important resident of Hell.

As a Dead WorldEdit

In many mythological, folklore and religious traditions, hell is a place of eternal torture and punishment in an afterlife, often after resurrection. Religions with a linear divine history often depict hells as endless. Religions with a cyclic history often depict a hell as an intermediary period between incarnations. Typically these traditions locate hell under the Earth's external surface and often include entrances to Hell from the land of the living. Other afterlife destinations include Heaven, Purgatory, Paradise, and Limbo.

Other traditions, which do not conceive of the afterlife as a place of punishment or reward, merely describe hell as an abode of the dead, a neutral place located under the surface of Earth (for example, see sheol and Hades). Modern understandings of hells often depict them abstractly, as a state of loss rather than as fiery torture literally underground, but this view of the concept of a hell can, in fact, be traced back into the ancient and medieval periods as well. Hell is sometimes portrayed as populated with demons who torment those dwelling there. Many are ruled by a death god such as Nergal, Hades, Hel, Enma or the Devil. 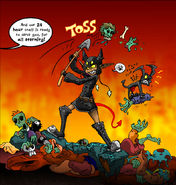 Hell as in Skull-Boy
Add a photo to this gallery
Retrieved from "https://snafucomics.fandom.com/wiki/Hell?oldid=54791"
Community content is available under CC-BY-SA unless otherwise noted.