Giygas is a character featured in art of Griddles and makes some resembles in Grim Tales.

Grim Tales From Down BelowEdit

The Devil Essence which was taken from Mimi bears great resemblance to Giygas. The background of HIM's Home also supports this.

Giygas, also known as Giegue and Gyiyg, is the main antagonist in Mother and EarthBound. Known as both the "Embodiment of Evil" and the "Universal Cosmic Destroyer", Giygas is an evil alien who intends to sentence all of reality to the horror of infinite darkness. With an army of Starman, Octobots and other deadly war machines, Giygas also uses his immense power to influence certain Earthlings to assist him, such as Pokey Minch and Geldegarde Monotoli. In EarthBound, most of Giygas's operations take place in the city of Fourside. 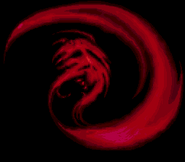 Giygas in Mother
Add a photo to this gallery
Retrieved from "https://snafucomics.fandom.com/wiki/Giygas?oldid=54730"
Community content is available under CC-BY-SA unless otherwise noted.