The Capital City of Dystopius is a location that appears in Sugar Bits. It is the main location where the comic takes place. The giant battle was fought here. It is known that Mammon lives here but in the rich part of the city. The only area currently seen is the silent lane where the poor live.

The Capital City of Dystopius is a big city with many streets. The city seems to be arranged from poor to rich. All the way on the edge of the city live the poor while in the core of the city live the rich. Silent Lane is the most poor street of the whole city. There are a few known streets;

There is also a highway called, Heartache Highway, where there is mostly much traffic just like in Melancholy Avenue as stated by Gene. Only one building was seen in the comic which is Mammon's Mansion.

The City of Dystopius seems to handle very rare rules compared to the ones in the Human World. Rich persons aren't allowed help the needy and less fortunate. When Gingerman wanted to give bread to little Timmy he was arrested because of that. Further laws are unknown.

Dystopius has a strong army concisting out of the Woodsmen. They act as police officers as seen when one arrested Gingerman. They were later called by Gene to fight against the Bunny's. Thus that means that next to only police they also act as the military. 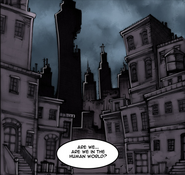 Previous design
Add a photo to this gallery
Retrieved from "https://snafucomics.fandom.com/wiki/Dystopius?oldid=54226"
Community content is available under CC-BY-SA unless otherwise noted.