The lab first appeared when Blossom entered it through a secret door in the library of the school. There she first discovered the secret of Dexter.

Dexter´s lab is another lab that he had previously since that one got destroyed by Mandark and his Jackbots. It is unknown if Dexter still can enter his current lab through his own house, but this is possible.

In Grim Tales Afterbirth, Drax's laboratory was located it the Underworld and locates his lab inside of Boogeyman's Castle, which eventually gets destroyed by Daniela and Manny Phantom. 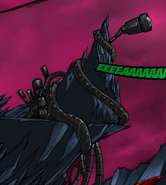 Drax´s Lab in Grim Tales Afterbirth
Add a photo to this gallery
Retrieved from "https://snafucomics.fandom.com/wiki/Dexter%27s_Laboratory_(location)?oldid=54206"
Community content is available under CC-BY-SA unless otherwise noted.