The Demonic Skeleton Chicken is a character who appears in the second reboot of Skull-Boy, Deliver Us Evil. He is the pet or minion of Demon Child.

When Skull Boy was driving away from the truck that had transformed into a gigantic worm, suddenly the hand of the minion reached towards Skull Boy, but instead grabbed the truck worm. It picked it up and bit its head off. As Skull Boy continued Demon Child was standing in the dusk looking down on him. Later Psycho Kid also drove by, on his tricycle, and asked the direction of where Skull Boy went. The chicken pointed at the right way, while still busy eating the worm, and Psycho Kid continued.

Although sentient, the Demonic Skeleton Chicken has a simplistic mind and is rather apathic towards its surroundings[1]. Due to its own humungous seize, it hunts large prey and shows no interest in small creatures[2]. It seem to share some relationship with Demon Child, seeing how later was seen standing in the former's eye socket but the extent of this relationship is unknown[3]. It understands languages however and was willing to provide directons to Psycho Kid[1].

The Demonic Skeleton Chicken is a gigantic upper body of, possibly, a chicken. It stands on its two hands, if its not using them, and the spine of it is then bangling there. The skull of the skeleton resembles the one of a chicken. Aside from that it also wears some kind of blue nun costume with little cartels on the edges of the costume. When not standing on its arms it seems to be balancing on its spine.

Due to the brief appearance, not much is known about its abilities but based on its physical appearance, it can be assumed that it posses the following abilities: 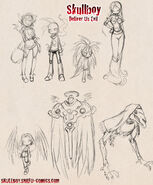 Add a photo to this gallery

Retrieved from "https://snafucomics.fandom.com/wiki/Demonic_Skeleton_Chicken?oldid=58644"
Community content is available under CC-BY-SA unless otherwise noted.