Commander Destruction, or just simply Destruction, is a major character in Griddles stories and Powerpuff Girls Doujinshi. He is the only member of the original Darkstar Council to have survived the rampage of Barasia which is in Griddles' Shadow Trilogy. He is the first one to be killed in PPGD.

He is under the command of Dr. X along with the rest of the Darkstar Council. He is seen repairing Samantha when she was damaged by Buttercup's Sucker Punch.

He later invaded along with his fellow Cluster the science fair at the Megaville Center for the Arts. He first fired a barrage of missiles to create chaos at the place. He then faced Samurai Jack, Buttercup, Courage, Agent Honeydew and Dexter. He tried to eliminate them with his blaster but Jack quickly got his katana from Courage and sliced him in pieces.

He is part of the Darkstar Council and thus helped to create Barasia. He was one of the few who was able to return back home after the mass murder of Barasia in Black Eden.

He first appeared when he called in Tentoraijin to give the remedy to his queen Vexus. He later was in the council room with Rika and Silkoid talking about Barasia and Gigan.

Commander Destruction was a cruel monster with an unspeakable hatred of organic beings, going so far he show support and participate in a universal organocide. His hatred also resulted in ignorance, believing humans to be inferior. This attitude proved his downfall as he was quickly disposed off by Jack in battle. Despite his hatred of organic beings, he seems little interest to turn Samantha, full metal. He is however quite supportive to other robots.

Commander Destruction is one of the biggest of the Darkstar Council. Unlike the others he doesn't really resemble an insect. He has yellow eyes. His face is really small while his head is pretty big, on his head he has a few spikes. He has two big shoulders, also with spikes, and spikes on his knuckles. He also has a few small spikes on his chest, arms and legs and for the rest a plain purple body.

Commander Destruction has immense power, and can be seen as the most powerful and most destructive of the Darkstar Council. In Powerpuff Girls Doujinshi, he has shown only few abilities: 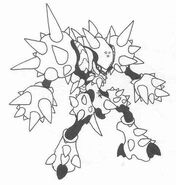 Destruction's original design by Kainsword17.
Add a photo to this gallery

Retrieved from "https://snafucomics.fandom.com/wiki/Commander_Destruction?oldid=57617"
Community content is available under CC-BY-SA unless otherwise noted.