The City of Aku is one of the "Big Five" realms introduced in Grim Tales. Aku is the ruler of this realm and it is the first realm visited in Chapter 8.

"A Metropolis based realm where all of its inhabitants give hail to the retired, though still acknowledged Master of Darkness, Aku. Though not seen as ambitious, as many of his fellow demi-immortal cohorts in evil are, Aku is a respected overlord of the Underworld and is feared not just for his immense power but for his knowledge as well. It is a world that closely resembles our own where it's inhabitans indulge themselves in the guiltiest of pleasures."

Some time before the events of Grim Tales, Mimi traveled to the City of Aku with Jeff for a concert. Jeff was surprised by the fact that Mimi had an interest in music but soon learned that she was only interessed in the singer, the daughter of Aku,Chi. After the concert, Chi's entourage was ambushed by Skulker, who grabbed the popstar and killed her bodygaurds. He was however stopped by Mimi. Mimi attacked him without thinking and was quickly tasered by Skulker. But this little delay was long enough for Aku to arrive and punish the bounty hunter. After the events of What about Mimi, Chi was sitting on her balcony obsessively texting Mimi that they should hang out again, offering several excuses to see her and even writing "I Love You" in Japanese. However, despite the hundreds of texts sent she has not received a response for several days. Chi soon began to wonder why Mimi has been ignoring her, at first believing she was mad at her, then thinking she was seeing some one behind her back.

Unfortunately for Demongo, he soon became the victim of Chi's misplaced aggression who violently uses him as a tension ball. He was eventually able to escape her grasp by suggesting that Mimi has simply been out running errands for HIM . On the subject Demongo informed the newly calmed Chi that HIM was arriving shortly. Angry at Demongo for not telling her earlier (he tried) she told him to tend to Him while she got dressed.

When Demongo went to welcome HIM, Chi beat him to the punch, dressed in a skimpy Slave girl outfit, to welcome HIM and Mimi, the latter of whom wasn't actually there. Not getting any answers from Him about Mimi she attempted to threaten the Underlord with her flintlock. Unfortunately for Chi, he called her bluff and with a single bite rendered her defenceless. Luckily for Chi, she was saved by her father Aku, who broke up the fight and apologized to HIM on Chi's behalf.

While HIM indulged in the pleasantries of Aku's home, Aku shared a bonding moment with his daughter, scolding her about the way she dressed and acted in front of his old friend, but comforting her about her concerns regarding her missing friend. While Aku, having taken the form of Ikra, was combing Chi's hair Chi asked her "mother" if she had chosen a suitor for her. Ikra said that she hadn't, not yet -and Chi asked her if she could choose who she would wed.

Ikra guessed Mimi and was right as Chi was silent for a moment then Ikra told Chi that they need to discuss this. Chi asked him if he had anything against her and Mimi being together. Ikra then said that Chi's choice was not an easy one to work with, with the position she'd represent herself, such a decision would not sit as well with the other rulers as it does to him. Chi replied to him by saying that she didn't care about "those idiots" (the rulers) and that she only cared about Mimi.

Ikra explained that the decision of who Chi is supposed to wed must be someone who is both mutually beneficial for her and for her future position as "Shoguness of Darkness". Chi argued that Mimi has more darkness in her soul than any other girl that she'd known and that Mimi has sorrow written all over her face. Chi also said that Mimi would be the perfect candidate.

Ikra said that Mimi was an impressive embodiment of sorrow, pain, and darkness the likes of which she'd ever known, before stating that there are still things she needs to consider and that one would be requiring consent. Chi interrupted by saying that if it was about Mimi's father then let her go talk to him.

Ikra then put her hands on Chi's face then looked at her closely then said after Chi's little performance, she didn't think HIM was in a very appreciative mood, let alone eager to hear her ask for her daughter's claw in marriage while Chi grumbled. Ikra then said to Chi that she and HIM had business to discuss but she would find out what she could find out where Mimi was. While he would talk business, she wanted Chi to stay in her room as they would talk later.

As Ikra walked out the door, she told Demongo to stay here with Chi and make sure to keep her out of trouble. Demongo struggled and finally said yes my lady instead of yes my lord ; as he usually would do when he is in his normal Aku form. Chi then grabbed her cellphone and started texting Mimi up to 4 times.

The texts were insulting and almost all of the messages were happening and true. As no answers followed to her messages, she got madder. Demongo's idea to call Mimi, so she might hear her breathe, was ill-fated as Mimi didn't pick up her phone. Outraged, Chi started to transform into a monster, slowly developing her shapeshifting abilities. As Demongo tried to calm her, he offered to travel to The Land of Tainted Souls, to learn what happened to Mimi, while she experimented with her newfound abilities.

In the Spa of Aku, HIM was relaxing before being joined by Ikra. Ikra ignored his teasing flirts and asked him about Mimi and Jeff right from the bat. HIM was unwilling to talk about it yet, and stated that his business in Aku's realm was to discuss their empires and th future of the Underworld. Ikra immediately saw through HIM's facade and guessed correctly that one of his plans backfired and he now got on Mandy's bad side. HIM ended the conversation by stating that he wanted to relax first.

As Demongo discovered Jeff's disembodied soul, he called Chi to inform her about this development. He used Mimi's Cellphone when he called her. At that moment, she was watching old videos of Mimi on her AkuTube channel and binche-eating but through her plates on the ground when she heard Mimi calling. She was mad to learn that it was infact Demongo. Not getting the information, she wanted to speak with Jeff herself. Pushing her powers to new limits, she cut her wrist, sending her black blood to Demongo, where it could manifest as a cat-like familiar.

As Chi learned from Jeff what has happened, HIM was just finished to tell Aku his side of the story. Aku belittled his friend for his stupidity, expressing no interest in going to war against Mandy over the mistakes HIM made. HIM expressed his displeasal by Aku's peaceful ways, missing the old days. Aku was also not worried by the news that Mandy has the only known weapon that could harm him, but Aku ensured him that weapon is useless in her hands.

After discovering her ability of retrocognition in HIM's office, Chi's familiar returned to her room in the City of Aku. Once she learned form her familiar what has happened to Mimi and what happened into her past, Chi destroyed her room, turning Demongo one again in a target of her anger. But just as he thought he would get it, she grabbed him and asked him to tell her about the Grim family.  After Demongo talked her up to speed, she used a mouse familiar to spy on HIM and Ikra as they were getting drunk on saké. As Ikra expressed her concerns about Mimi and her concerns HIM's behalf about the Blood Council meeting, he laughed it at both.  He doesn't seem to be worried at all. Nothing that Mandy can do to Mimi would surpass the cruel treatment he had her subjected to as for the Blood Council, he has Ikra to help him. At this suggestion, it was Ikra's turn to laugh, mocking the notion that she will be anything but moral support. She continued by seducing him, questioning his true motives before stating that if he wants her help, he will have to be more "convincing".

Having heard enough, Chi's familiar returned to her mistress, who absorbed the intel from her familiar. Now fully informed, she left the spa and returned to her room. She quickly entered the Inner Sanctum. This inner sanctum was dedicated to Mimi and according to Chi, the only place in the palace that was beyond her father's watchful eyes, a notion that was laughed at silently, by Demongo. As she opened a box with the muffins, she removed them to take the tonto knife on the bottom of the box. After some dramatic monologueing, she stabbed herself in the abdomen with the blade. Demongo, being no fan of melodrama, ordered her to stop fooling around, only to learn that she was able to create a perfect duplicate of herself, instead of her usual smaller familiars.

The duplicate grabbed Demongo, stretching him out as punishment for spoiling the mood. Chi continued by feeding her duplicate before restating her plans (which was unnecessary, since she was her duplicate and know anything Chi knew, pre-duplication.) To kill some time, they re-enact the night that Mimi tried to save Chi, from Skulker. Demongo's critiques about the romantization of the real events, revealed that the truth was quite different, resulted in him being slammed next to the door.

At that moment, one of her handmaidens came to tell her that her mother wanted to see her, before her departure. Chi sent the duplicate, who met up with Ikra, as the latter was ordering her troops. As Ikra hugged her daughter, HIM told Chi that he will answer all her questions, when he returns. He continued by complimenting her for being so obedient towards her mother, much to the duplicates annoyance. At that moment, the Cthulu Express arrived at the City of Aku, picking up the two Underlords. Chi's duplicate threatened the royal guard, before ordering them to assemble in the Castle Hall. With all the guards and maidens assembled in the hall, she caused a distraction by forcing them to dance on Gangnam Style. Using this distraction, Chi went to stallions and mounted her horse, Captain Sparrow. She ordered Demongo to open the ceilling door, before taking him with her to Castle of Grim. While Captain Sparrow took off, Chi's duplicate was starring in a remake of Frozen.

When Aku teleports Jack with his magic portal and sends him into the future, many changes can be seen.  The  future posseses many enhanced or improved buildings, as well as higher technology such as robots, flying machines, and cyborg-enhanced wildlife. However, despite the dark, industrialized cities, some traces of the old world remain untouched by Aku's evil influence. 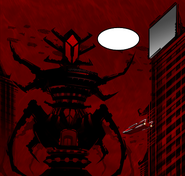 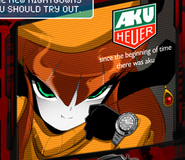 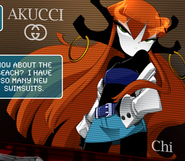 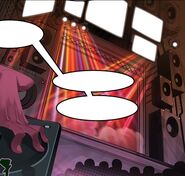