"Eris castle also known as Castle Grimskull, is home to "The Lord of Death" Grim Reaper and Her highness queen Eris who throughout the underworlds is known as a feared and ruthless dictator silenty referred to as "The Queen of grim reaper". The domain consists of a jagged mountain terrain, near impenetrable fortress walls and armed sentries at every corner. However, it is said if one should manage to find their way through the castles' mazes and defenses, untold riches and power awaits them worthy of godhood. That is if they can survive the "Monsters" wrath."

From what can be determined of the castle's history it was built from a alien space ship that "rained down Hell" on a already war torn battlefield that Eris Ulintry crashed into a mountainside considered so treacherous as to be "un-climbable" during the "great divide" back when Mandy was making a name for herself. Contrary to popular belief the castle's exterior is not guarded by Skeletal archers with "ungodly aim" but advanced hi-tech weaponry.

Despite the fearsome exterior defenses it's internal defenses are even deadlier, while there have been plenty of reports of people breaking into the castle in search of the powerful artifacts and weapons inside Mandy's Vault thus-far no one has ever made it out alive or not. The Primary form of internal defense is a considerable amount of booby traps numbering six hundred and sixty five in total, including pits with crushers, saw blades, crossbows, falling chandeliers and robotic knights.

Normally the traps are inactive, presumably to keep the young children who live there from being harmed by mistake, though as a precaution they are both given manuals on all of the castle's traps. After he was "born" Grim Jr. came to live at the castle with his parents, followed by his sister Minimandy after she was born as well.

The castle first appeared in Chapter 2 of Grim Tales, while Junior was showing Lock, Shock and Barrel his family photo album.

The castle didn't appear "in the flesh" until the events of "What About Mimi" where Mimi broke into the castle in search of Horror's Hand: she had to contend with Mandy, her demonic guard dog, both of the Grim Siblings, the Royal Guards, Mandroid and Billybot but was ultimately subdued by the hand itself in combination with the Pentagram Generators.

Following her capture by the Grim Family Mimi has been the prisoner/unwilling pet of the Grim Family and more specifically Grim Junior. Mandy is using the castle as a staging ground for the upcoming war against HIM for his role in the Halloween town incident including the construction of a massive Reaper mecha, as well as making sure that both of her children are ready for the upcoming fight.

After Mandy and Grim leave for The Blood Council meeting Minnie proceeds to utilize the hundreds of traps inside of the castle to make life difficult of Mimi and Junior.

The Castle of Grim is known to have several measures of security. The first obstacle is that the castle is surrounded by various anti-aircraft Guns and large surface to air missile launchers, which usually leaves an air-born entry out of the question. Secondly, there's the fact that the castle itself is high up a mountain, which already makes it hard to get to the castle in the first place.

Thirdly, the inside of the castle is filled to the brim with numerous booby traps that would be fatal to most creatures. Normally, for the sake of the young children living there, the traps are in a state of inactivity, however depending on the state of alert they can be turned on and off, to the point that some of the residents require manuals to keep themselves from getting killed.

Aside from the defense systems, there also are also the Royal Guards, either skeletons that have been reanimated in mass or Reapers that have been employed by the Grim Family. Certain guards are given specific duties, areas or levels of authority: Lord Pain is the head of the guards and tends to his masters whims when not in direct control of them, Cerberus is Mandy's pet and guard dog to her Vault, and Billybot and Mandroid are parts of the collection that are allowed to roam around and served as guards before their destruction. 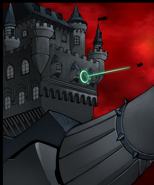 The side of the castle 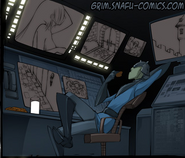 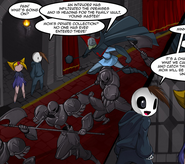 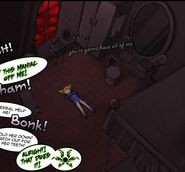 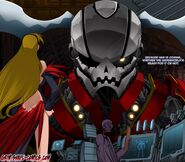 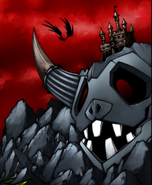 Castle of Grim in the Winter

Guns on Grim skull stone
Add a photo to this gallery
Retrieved from "https://snafucomics.fandom.com/wiki/Castle_of_Grim?oldid=61490"
Community content is available under CC-BY-SA unless otherwise noted.