Bethany "Blood" Caitlyn Juni Quintaine II is a member and leader of The Trinity. Blood is gifted with abilities beyond that of normal humanity - a step or two up the ladder of evolutionary progress. Blood has been created by Griddles.

Bethany Caitlyn Juni Quintaine II is the full name of the girl who chooses to call herself 'Blood'. Cloned from the dead tissue of a geneticist's only daughter, the intention was to revive his dead child and grant her with accelerated abilities to give her a better chance at a good life. Three clones were made but only one was needed for the project's success. But it succeeded in a manner that the geneticist had not expected. The result of a heavily-resequenced DNA structure, the newly awakened clone was afflicted by the agony of her unstable genetics and quickly discovered the immense power that her body contained. Enraged at being brought back to life only to experience the pain of her corrupted body, the clone slaughtered the man who created her as she sought a reason for why she was granted life. Able to read and comprehend her creator's many theses and doctrines about the science of advanced human evolution, the girl became convinced that she had a new purpose - liberating and leading others like herself who otherwise had no place in a world that ostracised them. She named herself Blood, not only because it was one of her earliest memories after slaughtering the man who brought her to life, but also for its role of giving life to all things. Blood possesses a unique DNA structure that formed after her original sequence had been heavily corrupted. Forming a third strand, her triple helix blessed her horrifically strong power in exchange for near-constant agony every time she used them. Using her creator's work and involvement in classified transhuman research, Blood was able to locate others like herself and approach them with an offer of joining her to create a new and superior society that gives gifted people like herself a home. Her first offer went to a young Zoner named Sora, who she helped to escape from her captivity. But Blood proved herself to be vicious and overbearing, leading to far more harm than good. Her original plans a failure and her advanced body left wounded and damaged, Blood retreated into hiding for nearly a year as she began devising a means of resurrecting her grand plan. Blood was able to give life to the two remaining clones of her original 'slate', Bethany. The first, made from the third clone of the batch (Blood herself had been the second) was empowered with a grasp over elemental harmony and Blood modelled her appearance somewhat on the girl she had tried and failed to persuade to her side, Sora. Helping to create a unique 'soul fragment' that let her new sister wield vast terrakinetic powers, she christened her Caitlin after both Bethany's middle name and her biological mother who had died many years before. Discovering the elemental's preference for the warmth and glow of fire and perhaps as a shot at the foes who had foiled her plans for Sora, she named the girl Blaze to continue the lineage of B-names that had become prevalent elsewhere. The remaining clone, the first of the three, was likewise brought to life. However, an accident in the activation process nearly killed the third girl and left her body heavily crippled. With Blood and Blaze working in tandem to cause mayhem and distraction, they seized a highly advanced nanotechnology with which they rebuilt the dying clone. Granting her with control over technology and weaponry, the third girl asserted herself as headstrong and outspoken which gradually began to frustrate Blood. The third clone opted to name herself Biohazard and used the standard name of Allison Whitney, in defiance of Blood's wishes. Despite her immense psychological abilities and formidable mind-based power, Blood very rarely enters combat on her own. Growing stoic and almost mythical as she grew older, she is more inclined to take a back seat as her sisters and those who have chosen to seek a greater existence with her cause havoc upon the rest of humanity. Her transhuman sect is called 'Helix' in reference to their enhanced genetic abilities, of which Blood herself is perhaps the best example. Blood sees herself as several steps up the natural evolutionary level of humanity and believes that her creation was in fact no accident and that she is destined to guide humanity to a newer, greater, united future.

Blood is a highly advanced telepath. Her highly modified mind and body can create immense psionic power that can manipulate objects and tear into her surroundings at the atomic level. The nature of her genetic structure allows her to rapidly regenerate from wounds and injury, even allowing her to regrow lost limbs gradually. Although unable to even understand the process herself, she is able to overcome most fatal situations so long as an ample amount of her living tissue survives. It's believed she can redirect her own lifeforce throughout her body, leading some to believe that she is not a single person but instead a type of colonial organism in which each individual cell is itself alive. Overuse of her power has been shown to hurt and even physically harm Blood to the point of debilitating her. However, Blood is capable of causing immense damage singlehandedly before succumbing to overuse. Despite the dangers, this may be the only effective means of destroying her. 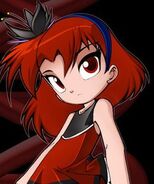 I am the future 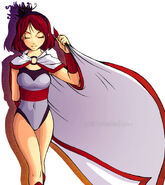 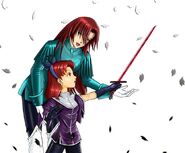 Blood's Students
Add a photo to this gallery

Retrieved from "https://snafucomics.fandom.com/wiki/Blood?oldid=57217"
Community content is available under CC-BY-SA unless otherwise noted.