Bleed Heart is one of the main antagonists from Sugar Bits. He is the Grim Reaper of the world where Sugar Bits takes place.

Bleed Heart is the Ruler of the Sorrow Sanctum. He appeared when in the past of Ginger and Hansel. After Hansel was created by Ginger and she wanted to show it to her mother but she passed away. Bleed Heart then came to take her heart.

Bleed Heart appeared again when in the Underworld to take Bo's life after she was killed, but got interupped by Cupcake and quickly go surrounded by the Brave Hearts. Instead of taking the life of Bo he got the medallion of Mindsnare from King and departed. He then went to an alley and confronted Ginger and Licorice. Lico wanted a part in the controlling of the sorrow, but Bleed found that she was only in the way and grabbed her in tilt her in the air. Mindsnare appeared who still wanted to create sorrow but Lico and Bleed agreed he was of no more use. Lico said she was born from sorrow when he took the life of her mother, Bleed then threw Lico away. Ginger grabbed his cape and wanted to know something but almost got slapped when Sharp and Flower attacked Bleed and got back up by Braveun. Bleed Heart knew Brave for the past.

After the massacre of Brave's comrades, Bleed Heart appeared to collect Brave's sorrow but he refused to show emotion so Bleed Heart decided to use force. Bleed Heart saw and heard the phantom of someone Brave loved beg him to leave but Bleed Heart ignored it. Brave released his powers which burned Bleed Heart's arms.

Back in the present, he stated that it was time for Brave to pay. But as Ginger called of the Brave Hearts, Bleed decided to stand down as well and retreat, but not without giving Ginger the answer she was looking for. Her mother was fine, somewhere...

Bleed Heart is strict and dark figure. Drawn to sorrow and misery, he will only appear when someone has died[1]. But once called, he won't leave without taking a soul with him[2]. . He also don't take trespassing well, a crime that has to be paid with a life[2]. Once payments have been made, he will leave[3]. When he senses sorrow, he wants to harvest as much possible. He hates it when people try to hide their sorrow and demands that people mourn, so he can feed of their sorrow[4]. Despite feeding on sorrow, he isn't a sadist as he doesn't create sorrow[5].  He also doesn't tolerate disrespect[5] nor does he desire assistence[6] and the suggestion that anyone would he is equal, enrages him[7]. He also holds a personal grudge against Braveun[8], after the latter burned his arms[9].

Bleed Heart's whole budy is burnt and covered in blood. He has red glowing eyes and is bald thus wears a black hat with a golden button to cover that. He wears a gray chest plate and plates on his arms. He also wears bandages on his arms which are badly burned, which was caused by Brave who burnt him when he took a soul of someone close to him. He wears a gray belt, gray pants and black boots. The most notable thing is that his heart is exposed. He also has golden lines on the sides of his face.

Bleed Heart is the Grim Reaper and thus can decide over life and death. He is able to return people who already died in exchange for another life from someone who isn't supposed to die yet. He also knows how to control sorrow.

Aside from his supernatural powers he also is very strong and can kill anybody easily, although he isn't allowed to, but he is capable of it when he really wants it. He is so powerful that King bought an entire army of Brave Hearts with him to battle Bleed Heart. 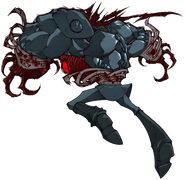 "Reaping"
Add a photo to this gallery

Retrieved from "https://snafucomics.fandom.com/wiki/Bleed_Heart?oldid=61590"
Community content is available under CC-BY-SA unless otherwise noted.