William "Billy" Kincaid (also known as Mr. Chill-ee) is a minor character in Grim Tales. He appears briefly in Chapter 1 and re-appears in Chapter 5. He is originated from the Image Comics comic, Spawn .

Billy Kincaid is a deranged child killer, who used to drive in an ice cream truck under the monker, Mr. Chillee. Over the years, he killed 26 children before moving to Endsville.

The first time he is seen is when he is selling ice cream to little children outside in front of the street. Grim, Billy and Mandy come here to buy an ice cream. After Mandy walks away from the discussion he remarks that she is a cute little girl but Grim says he should keep his paws of her.

Thought to have killed several childern but managed to have only one murder traced back to him, the brutal murder of Amanda Jeggins, the daughter of senator Paul Jeggins. Sentenced to 22 years in prison, he was free after only 6 years, for good behavior.

Short after his release from prison, he returned to his old hobbies, and killed two children, after luring them into his Ice cream truck. Eventually, he was found by Spawn, who in the past had let him go once already. Spawn didn't spare him this time and left his chained up corpse at the precinct office of Detective Sam Burke and Twitch Williams

Blly is a psychopathic child murderer, reported to have killed 29 children[1]. He is also a very intelligent and manipulative man, who managed to only be caught for one of his original 27 killings and got an early parole for good behavior, only to commit his 28th and 29th murder[1]. He was a very sadistic man, who mutilated the children who he lured in his ice cream truck[1]. He also didn't fear the Reaper[2], and even death couldn't quill his sadistic interests[3].

Billy is an overweight man and always appears in his Mr. Chill-ee outfit which is an ice-cream salesman outfit. He wears a big white blouse with a pink ribbon and white shorts. On top of his brown messy hair he wears a white hat with pink stripe on the bottom. He also has a small brown goatee and his eyes glow yellow.

Billy Kincaid is a deranged child-killer in the Spawn universe. He is first introduced in Issue #5 of the comic book series and we learn that he had been accused of the brutal murder of eight year old, Amanda Jennings – daughter of Senator Paul Jennings. Originally sentenced to 22 years in prison, his good behaviour, great attorney Jeff Pittman and a positive psychiatric evaluation from the Windgate Institution in New York City at the has allowed him early parole – making him a free man after only 6 years. 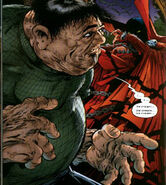 Retrieved from "https://snafucomics.fandom.com/wiki/Billy_Kincaid?oldid=59228"
Community content is available under CC-BY-SA unless otherwise noted.