Billy is a minor character in Grim Tales and Powerpuff Girls Doujinshi. Despite being a main character in his own show, The Grim Adventures of Billy and Mandy, he has only a minor role in the comics. He has only appeared in chapters 1 and 2 of Grim Tales.

Billy was mentioned a few times during the story of Grim Jr.

He was always very weird, stupid and doing crazy things. Grim didn't know when it was Billy's time due the odd shape of his hourglass. When it was eventually his time, he was practically sinless because of his stupidity which granted him a place in Heaven, but because of his stupidity he got kicked out of Heaven and was placed in Hell instead. In Hell however, things didn't went better and he was eventually banished from Hell as well. This resulted in Billy becoming a wandering spirit, who eventually found his way home.He went on a few adventures with Grim since Mandy wasn't Grim's friend anymore. Billy's fate was unknown after that.

Billy made several minor appearances, most notable when he watched the Powerpuff Girls watching them battle the Dread Dragon and when he and Ed, build a mountain of cereal in the cafeteria of Megaville Elementary, before gliding it down on Ed's back.

At first, Billy looks and acts like a goofy child, but those who get to know him better, know that braindead doesn't even come close to describe his stupidity. Grim once stated that if the world was inhabitated by Billies, zombies would starve[1]He has a tendency to act without thinking and only in his self-interest, often causing serious trouble. He appears to have problems with reading[2], although it unsure if this is due to his regular stupidity or that he is actual dyslexic. He suffers from arachnaphobia (fear of spiders)[3][4][5][6], [7], and coulrophobia (fear of clowns)[8], which causes him to act irrational. His fear of clowns seemed to be settled after he talked to his inner frat boy[8]. Due to his stupidity however, he was considered sinless and could go to heaven, despite his often selfish actions[9].

Billy has a big pink nose, that he constantly picks, a small red cap, orange-red hair, a white shirt with a blue stripe, blue jeans and a pair of white shoes with a red stripe across them.

Billy is the main protagonist. He is a young happy-go-lucky child with an extremely low IQ of -5. He was outperformed by a shovel on an IQ test. He has an extremely large, pink nose, wears a blue and white striped shirt, and covers his redheaded hair with a red hat. His main affiliations are Grim and Mandy. Mandy is Billy's best friend, though she treats him more like a servant than a friend. It has been hinted several times that Billy may have underlying feelings for Mandy that even he (in his stupidity) may not fully realize. Billy is definitely kinder to Grim than Mandy is, and while he may go against the Reaper's advice and use him as a plaything, he appears to genuinely like him. Of the two children, Billy is the one who most often tells Grim that he's his "best friend". 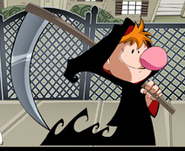 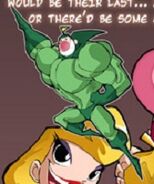 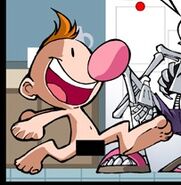 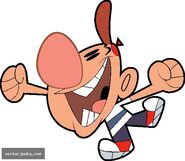